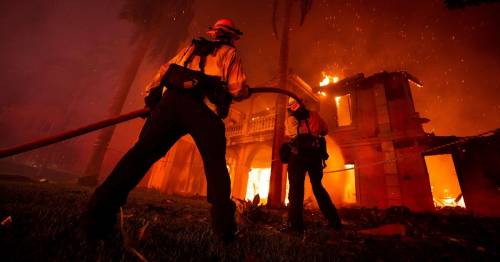 A state of emergency has been declared with a rampaging brush fire now covering 200 acres and destroying at least 20 luxury homes in the exclusive area of Laguna Niguel in California.

Mandatory evacuation orders are now in place with the fast moving blaze having started near a water treatment facility between Laguna Niguel and Laguna Beach, shortly before 3pm on Wednesday.

By 8pm the fire had swept across 200 acres and destroyed in its path at least 20 houses, many worth millions of pounds in an exclusive zone, due to high winds.

Laguna Niguel is a hilltop city of about 65,000 people inland of Laguna Beach and about 50 miles south of Los Angeles.

California is enduring one of its worst droughts in recent times meaning that there are plenty of bushes and shrubbery that is susceptible to fire.

Helicopters and aeroplanes have been flying overhead trying to put out the flames by dowsing it with water and fire retardant material.

Currently the fire is a threat for Laguna Niguel where evacuations are taking place and Laguna Beach is not in danger, authorities have said.

People living in the area of Pacific Island Drive and Coronado Pointe have been told to leave their homes by Orange County Sheriff officials, as well as in Vista Court and Via Las Rosa.

Authorities believe there are around 100 homes in the area and all roads have been closed off.

While nearby Laguna Beach isn’t currently under threat, residents are wary that the situation could quickly change.

The fires have led to evacuation orders in Laguna Niguel
(

Bob Chesley, a resident of Laguna Beach for 40 years, said a change in the wind direction would be worrying.

“If the wind shifted blowing north, it would come over the ridge,” Chesley told the LA Times. “Then we would be in jeopardy. The wind’s blowing south, so everything is going south.”

Many residents are recalling a devastating fire that hit Laguna Beach in 1993.

Orange County Fire Authority Chief Brian Fennessy said that although the figures are not certain, he believes around 20 homes have been destroyed.

He said that the strong winds were spreading the blaze rapidly and making it a difficult job for fire crews.

"You've got to remember that this fire was wind-driven," Fire Chief Fennessy told a news conference, reported ABC.com.

"We have embers cast very deep down into those canyons, many of them up into those palm trees. We had embers in our attic spaces, through vents. The focus is to get into these homes and to really take a look into those attics, to get down in the vegetation, to really make sure we're not leaving any hot embers in place."

Chief Fennessy said there have been no reports of any injuries.

Previous : Pittsburgh Penguins captain Sidney Crosby, ‘the best player in the world,’ being evaluated for injury after leaving Game 5 loss
Next : Ground rent to be completely banned – how it affects you and what homes are included