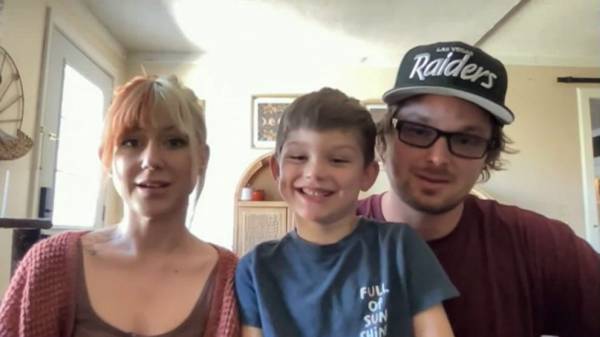 Sebastian Esposito is just 5 years old, but he already has more than 500,000 followers on TikTok. Under the username “@litttle.einstein,” Sebastian shows off his wide range of talents, from knowing the periodic table by heart to being able to replicate fonts from memory. His TikTok account, which is run by his parents Amanda and Ryan Esposito, has a far greater goal than just showing off his skills – the family wants to raise awareness for autism.

Sebastian, who is from Albuquerque, New Mexico, was 3 years old when he was diagnosed as being on the autism spectrum. He also has hyperlexia, a skill he began displaying when he was only 18 months old. Hyperlexia is when a person has an understanding of reading and writing that is advanced for their age. Ryan Esposito revealed that the telling sign of Sebastian’s incredible abilities came after watching him play with a wooden letter puzzle and spell out words like “cat” or “dog.”

By the time Sebastian was 2 years old, he could read and write 200 words. Sebastian is largely “self-taught,” according to his parents, who give him “the materials, the YouTube shows, and puzzles,” but he learns it all on his own,” says Ryan Esposito.

Sebastian can currently write in ten languages and dozens of fonts. His wealth of knowledge also expands beyond letters and reading to subjects like geography. He’s well-versed in the flags of the world’s nations and can identify them based on their shape alone.

ABC NewsSebastian Esposito and his family are interviewed by ABC News.

Sebastian joined correspondent Trevor Ault for ABC News Live Prime’s weekly segment “Tik Talk,” where social media sensations are interviewed about their stories behind the camera, and he revealed his favorite font to write using sidewalk chalk – his signature move. It is none other than Abadi, a versatile sans-serif font similar to the popular font, Helvetica.

Sebastian and his parents joined ABC News Live in April for Autism Awareness Month. Sebastian’s parents are impressed by the outpouring of support they’ve received after starting the page. Sebastian’s videos each receive an average of 20 million views.

“We had no idea it was going to take off the way it did,” said Ryan Esposito. Sebastian’s parents make it clear that their son’s love of learning is his idea of fun, and there is no planned production on their part. “This is what he does all day long,” Amanda Esposito explained of Sebastian’s writing skills. “Some kids love their trucks and dinosaurs, and he loves his markers and chalk.”

Sebastian’s first video was uploaded in December 2020. It showed his impressive math skills at the age of 3. The next video showed Sebastian schooling his parents on naming the capitals of all 50 states. His videos will often include his parents’ reactions to their son’s incredible intelligence with his dad even joking, “if he gets this, he’s illuminati,” as Sebastian took on a math challenge that would be difficult to conquer at any age, let alone at 4 years old.

When his parents were asked what they’d like Sebastian’s videos to teach his followers, his father responded, “we just wanted to show that there’s a whole community of kids that have hyperlexia.” And the Espositos hope they’ve “given some people some answers if their kids are the same.”