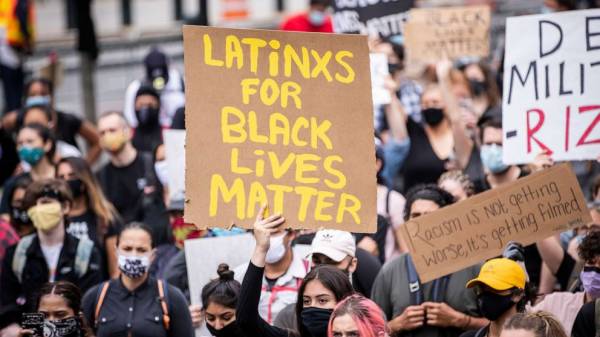 The many pan-ethnic labels used to describe the group of people who trace their roots to Latin America or Spain — terms like Hispanic, Latino, Latinx or Latine — have left some confused, some angry and many people debating what word to use.

Hispanic and Latino remain the dominant terms to refer to people from this group, according to the Pew Research Center, but a term growing in the public consciousness is Latinx, a gender-neutral version of the masculine and feminine words for Latino and Latina.

But the term has been criticized by some Latinos and Latino organizations who call the term elitist and non-inclusive.

ABC News spoke with language researcher, author and TikTok sensation Dr. Jose Medina about why it’s so hard to describe such a vast, complex group of people in a single term.

“As an openly queer, Latinx, Latine, Spanglish-speaking language researcher of the world, to me that intersectionality is really, really important,” said Medina.

“The reason why that’s so important is that no one really gets to choose how somebody self-identifies,” he added.

For nonbinary, gender-fluid, queer people and others, Latinx is an inclusive term that rejects the gender binary. It can also be used to refer to a group of people without using the masculine- or feminine-dominant pronouns.

Others have criticized the term because they say it “anglicized” the Spanish language, ignores the language’s roots, and “is not representative of the larger Latino community,” according to a Pew Research Center survey.

“There is no definite beginning to the term Latinx here in the United States. Some people feel like it started to appear in academia, specifically Latinx writers, around 2004,” said Medina. “But the truth is that there are others that point to scholars and researchers in Puerto Rico, in Central America, South America and other parts of the Caribbean that were actually using the ‘X’ and also the ‘at’ sign to be more inclusive in their studies and in their work.”

Only 23% of U.S. adults who self-identify as Hispanic or Latino had heard of the term Latinx, according to a 2020 Pew Research Center poll.

And a recent Gallup poll found that 4% of people surveyed preferred “Latinx” as the label of choice to describe their ethnic group.

Recently, the League of United Latin American Citizens, the oldest Hispanic and Latino civil rights organization in the U.S., and Congressman Ruben Gallego, D-Ariz., stated that they would no longer use the term Latinx because it was offensive to some and failed to prove that it had a wide acceptance.

When Latino politicos use the term it is largely to appease white rich progressives who think that is the term we use,” Gallego tweeted last month.

“There are a lot of folks that actually are saying that the Latinx term should not be used because it cannot be conjugated in Español. But the truth is that, if we really stop to think about it, we were colonized from the moment that the Spaniards came to the Americas and took away Indigenous tongues,” said Medina. “All of these attacks on really utilizing and leveraging linguistic liberation as a way to value intersectionality — [it’s] something that each and every one of us should defend, not oppose.”

The word is mostly known and used by younger Hispanics — 42% of those surveyed between the ages of 18 and 29 knew the term, but only 7% of those ages 65 or older have heard of the term, Pew reports.

However, a majority of those surveyed in a Gallup poll — 57% — said that it didn’t matter how they labeled.

It can be difficult to label a complex ethnic group in a single term, Medina said. These words link people from more than 20 countries in South and Central America, the Caribbean and Spain — of all different races, languages and cultures.

Medina says the term “Latinx” is just a tool to be used to be more inclusive.

“Although I understand some of the arguments, I think that at the end of the day, we need to be able to self-identify as we wish because nobody has the right to do that for someone else,” said Medina. “And if that means that each of us identifies in a different way, then so be it. That is what we should be able to do.”

Previous : Analysis: Rise in real bond yields may slow but not stop stock market bulls
Next : SAS banned from playing football after dozens of crack troops injured on pitch