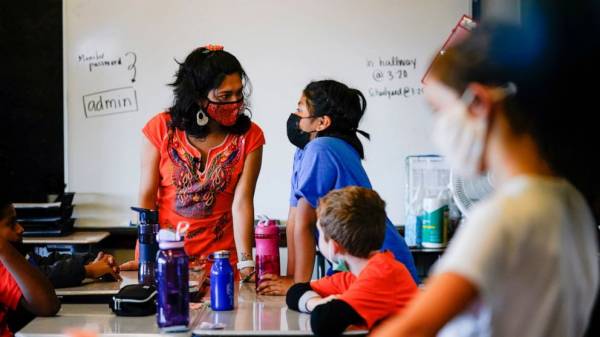 PHILADELPHIA — Philadelphia parents who don’t speak English say they’ve long been excluded from parts of their children’s education because of language barriers, something exacerbated by the pandemic and the return to in-person learning.

Parents told The Associated Press about students being used as translators despite federal prohibitions, incorrect telephone translations and poor communication about bullying. Experts say many other school districts have lagged in creating equitable systems for non-English speakers.

Mandy, who asked the AP not to use her last name, struggled with returning her 10-year-old special needs son to in-person school but decided the virtual option didn’t offer enough support for parents who don’t speak English.

Mandy said her biggest language struggles were during special education meetings at her son’s previous school. She still spends hours translating reports into Mandarin because the district provides limited translations.

During one meeting, a telephone translator said she was unfamiliar with special education and refused to translate, so Mandy started bringing a bilingual friend to help. Another time, a translator told Mandy staff were going to teach her son to “eat meat,” which her friend corrected, explaining they were discussing feeding therapy.

“It sounds like a comical incident, but it was really frustrating,” Mandy said in Mandarin through a translator. “It feels like immigrant parents are deliberately excluded and pushed to the margins.”

Jenna Monley, deputy chief of the district’s Office of Family and Community Engagement, said the office told school staff to start providing in-person interpreters for special education meetings when possible. She said staff are trained on using BCAs or the contracted translation options. But annual refresher trainings are not required for most teachers.

“I think that you are always going to find pockets of success. But there are some areas where things need to grow and improve,” Monley said.

English learners increased in the Philadelphia district to more than 16,500 in 2020, from around 12,000 in 2013, and nearly a quarter of people in Philadelphia older than 5 don’t speak English at home, according to census numbers.

Juntos, a Latino immigrant advocacy group in Philadelphia, surveyed families in 2020 about their pandemic concerns. Executive Director Erika Guadalupe Núñez said after basic needs, schooling was a major concern, including how to communicate with teachers who spoke only English.

She said members have regularly expressed concerns over schools, like children being asked to translate.

“We just want kids to be kids. And we want them to stay in class and have the same opportunities to learn that English speaking children have,” Guadalupe Núñez said.

The U.S. Department of Education’s Office of Civil Rights receives dozens of parental language complaints yearly. It issued guidance in 2015 on the legal obligation to communicate in parents’ languages, saying neither students nor untrained bilingual staff should translate.

Monley said the district has 101 BCAs after hiring about 45 in the past few years. They serve in 108 out of 224 schools, but many float between multiple schools.

Philadelphia City Councilmember Helen Gym, a longtime advocate for education and immigration rights, said she wants to see interpreters in every school every day.

“We have a long way to go to enforce the language access mandates that are clearly in the legal books,” she said.

Gym said immigrant families often seem like an afterthought, noting the number of BCAs was cut in half during deep budget cuts around 2011 after changes to the state’s education funding formula.

BCAs were created during the implementation of a settlement in a lawsuit filed by Asian American students in the 1980s demanding better resources.

But BCAs are still the only designated bilingual staff in school buildings, Gym said, and they often serve as brokers to important resources outside of school. Yet they’re paid a starting salary of $24,000, she said.

Olivia Ponce, 46, recalled trying to talk to a school counselor when another student hit her daughter, Olivia Vazquez. An interpreter wasn’t available, so the counselor asked a student to translate.

Another time, Ponce rushed to her son’s school after a student bit him. The teacher hadn’t planned on calling Ponce, but another mother alerted her.

“I didn’t know we had rights and that they couldn’t take students out of class to help translate for us. And that they were obligated to get someone on the line to help us. They never told us this,” Ponce said in Spanish.

Monley said the district couldn’t comment on specific allegations, adding many of the parents hadn’t filed official complaints through her office. However, many parents said staff never mentioned an official complaint process.

“Legal compliance and civil rights compliance are just as important as the equity issues at stake. Those issues are really pervasive and systemic in nature and not limited to Philadelphia,” said Ledesma.

Vazquez, now 27, is finishing up her teaching degree at Swarthmore College and hoping to help immigrant students have a more supportive experience.

“(Education is) something that I want to do because of my experience and because I needed someone who looked like me and somebody who would tell me that it was OK and make me feel proud of my roots,” Vazquez said.