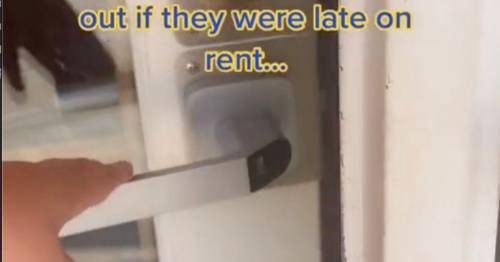 A landlord has sparked uproar after installing a fingerprint detector on a door lock which to keep tenants who fall behind on rent.

The video was shared on TikTok by Jennifer Sushka, who goes by the handle nerdypinkpanda, and was almost universally criticised.

The clip was captioned: "Here is the fingerprint lock they installed to track us… they would lock people out if they were late on rent."

She then demonstrates how to enter by pressing her thumb on the scanner before she is able to open the door.

It is also claimed the high-tech equipment leaves an electronic record of when they enter and leave their home, sparking safety concerns.

TikTok users are infuriated by the clip, with some pointing out their landlord has installed a way to track his tenants
(

In the comments Jennifer claimed her landlord would use the technology to "intimidate" their tenants.

She said: "They have an app. And sometimes they would lock people out to intimidate them".

As well as being an "invasion of privacy", some said, it also raised fears the gadget could enable stalking.

But TikTok users are infuriated by the clip, with some pointing out the landlord has installed a way to track his tenants – as well as having the opportunity to bar them from their own home.

One viewer commented: "Now they have a record of when I am coming and going? When I'm home and not home? I don't like anyone knowing that info."

Another said: "That is insane! Surely illegal?? Landlords think they can do what they want."

Property lawyer Seth Miller told CNet this isn't the first time he has seen landlord resort to brutal methods over their tenants.

He said: "I've seen cases where landlords resort to extreme forms of brute force to force tenants to leave.

"These new technologies are a weapon, and landlords will jump at the chance to use them."

Currently there is no legislation explicitly stating that landlords have to provide traditional methods of entry.

As the pandemic rolled across the US an eviction ban was brought in to protect those whose earnings had been cut, although the Supreme Court blocked a proposal to extend the ban through to October 3.

However, Illinois, Minnesota, Nevada, New Jersey, New Mexico, Oregon and Washington are offering protection to tenants for a little while longer.