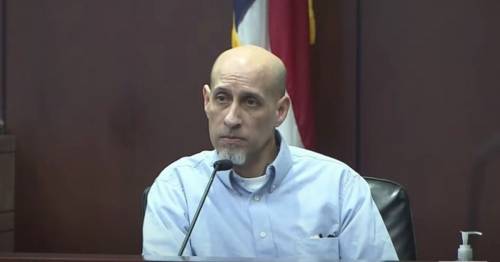 Dyeing her hair different colours, especially green, was just one of the ways that independent Monica Moynan would express herself.

Monica, known as Moni by her family, had a big smile and a loving personality. Even though she was just 22, she was always finding ways to reinvent herself, whether it was with a new hair colour or even a new job.

She lived in Holly Springs, North Carolina, with two young daughters, both under the age of three. As well as being a mum, Monica worked as a waitress in a local restaurant. She also had a side business making and selling immune-boosting elderberry syrup.

Then, in 2019, Monica started to research how she could become a doula – someone who supports women through childbirth. As Monica focused on providing for her children, there was just one thing holding her back – the father of her children, Brian Sluss.

Sluss was 20 years older than Monica. They had met when she was just 18 and she’d struggled with their troubled relationship. There were at least two domestic violence incidents, where Monica said he had punched and choked her, and had tackled and thrown her to the ground. Colleagues had seen bruises on her.

Monica took out a protective order to keep him away, but Sluss continued to text her incessantly and the on and off relationship continued as their young family grew.

While the young woman was strong-willed, she struggled with self-esteem and it made her vulnerable to being manipulated. With so much going on, Monica was kept busy and soon, people started to struggle to get hold of her.

Monica had a close relationship with her mum, Melanie Tucker. They lived an hour away from each other and could go weeks without getting together, but they were in constant touch with text messages.

But from April 2019, whenever Melanie asked Monica if they could meet, there was always an excuse as to why she couldn’t.

Monica was described as 'a vibrant force'

Over the next few months, Monica’s messages were full of happy news and the usual positivity. She’d message about family birthday plans or share that she was worried that a lost cat could upset her daughter. She revealed to her sister that she was busy training to be a doula and she was enjoying every moment.

“It’s going great. It’s the best thing I’ve ever done. I love it so much,” she wrote.

But by July, Monica’s mum was getting concerned that she hadn’t seen Monica in person for a long time, or spoken to her on the phone.

She called the manager of Monica’s apartment and discovered she hadn’t seen Monica since March, but she had seen Sluss several times.

Melanie called the police and requested a welfare check. Officers learnt that Monica had suddenly stopped turning up to work after 7 April. In fact, no one had seen her since then.

When the police spoke to Sluss, he said he’d last seen Monica in June. He said the young mum had become secretly addicted to heroin and had run away. So why was Monica texting her family like nothing had happened? It didn’t ring true with anyone who knew her.

The police then discovered that Sluss had been driving Monica’s car and had her phone. He admitted it was him who’d been sending texts from Monica’s phone to her family and friends, pretending to be her for months.

He said he’d done it because he didn’t know how to tell Monica’s mum about the drug problem or reveal she’d abandoned her children.

Sluss would later change his story and say that Monica had been depressed. Had she been unable to cope and left? The police investigated further and determined that Monica hadn’t been seen by anyone since April. The fear was that Monica hadn’t run away at all – something terrible had happened to her.

As well as not turning up for work at the restaurant, investigations revealed that Monica had stopped going shopping for groceries and her routine spending had stopped. Her social media usage had dramatically dropped, too.

Monica’s home was searched. It looked as though someone had cleaned the kitchen with bleach. Floor tiles were removed and police determined that there was human blood in the cracks. It was Monica’s blood.

Further investigations found that while Sluss had been constantly texting Monica to the point of stalking, after April he stopped altogether. Rather than impersonating Monica to cover up her running away, police believed he pretended to be her to hide the fact that he’d killed her. He used her tone and her texting habits so no one would suspect.

Monica and her mum Melanie

Sluss was finally arrested in May 2020 and charged with Monica’s murder. He was accused of killing Monica on or around 7 April. Without a body, it was a complex case, but the prosecution used Britny’s Law, a state law that allows first-degree murder charges to be filed against someone accused of killing a significant other if there is a history of domestic violence.

During the trial this year, which lasted three weeks, the prosecution said Sluss was abusive and manipulative, and that the murder was about power and control.

“Monica had tired of him,” the prosecution said, which made him angry. He killed her in her home and tried to cover it up. The police determined that Sluss had murdered Monica while the children were sleeping upstairs.

“She was making every effort to become a self-sufficient, single mother of two beautiful girls – so that she would no longer have to rely on the defendant. She was making efforts to leave this relationship and the State maintains that was another reason for her death,” the prosecution said.

Sluss had been cashing in since Monica’s death. He used her credit card and even sold her things on Facebook Marketplace.

Monica’s best friend testified in court. She said Monica had confided in her that Sluss had choked her, at least twice. “She saw the lights go out and that’s just all she can remember. She said she almost died.”

Monica’s friend told the court that Monica had “wanted to get away” from Sluss.

Sluss also took the stand. He admitted he had pretended to be Monica on social media and via text messages, but denied that he had killed Monica. He said he wasn’t in a relationship with Monica when she walked out, and although he’d been living at her place he had “no clue” where she was. He said that after Monica went missing, he didn’t report it because he believed she would come back.

The prosecution showed a “nanny cam” video of Sluss slapping a young girl, believed to be one of his daughters. When it was played, the court audibly gasped.

There was also surveillance video of Sluss pacing and double checking the locks on doors and windows.

Cheers at the verdict

In May this year, Sluss was found guilty of first-degree murder involving domestic violence. It was the first time Britny’s Law had been used successfully in the state. Monica’s family cheered and hugged.

Monica’s mum shared her grief after the verdict. “She was a vibrant force, she was magnetic, her energy was very strong,” Melanie said. “A piece of our family puzzle is gone forever. Sluss took that from us.”

Monica’s two daughters have been taken in by her mum and will be brought up knowing how much they were loved.

Brian Sluss, 44, was sentenced to life in prison without the chance of parole. He cruelly made Monica’s loved ones believe that she was safe – but they have vowed not to rest until they find her remains and bring her home.

Previous : Mum’s heartbreaking reason for owning world’s biggest Harry Potter collection
Next : Prince William and Kate Middleton ‘happy’ and ‘trying not to think about what’s ahead’