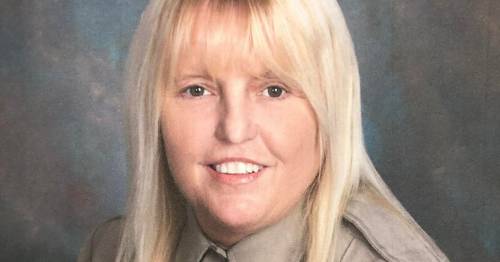 The American jail boss who sprang her murderous 6'9" lover from prison on the day of her retirement to go on the run may have been shot dead by the con.

Vicky White and Casey Cole White – who were not related – were caught on Monday in Indiana following a car chase that ended in a crash.

According to initial reports, the assistant jail director shot herself while in the vehicle after 11 days on the run from her jail in Alabama, some 280 miles away.

But police are now looking into whether violent White pulled the shotgun's trigger to kill her.

Lauderdale County Sheriff Rick Singleton said he wouldn't be "surprised" if it turned out the con had shot her.

Casey White was awaiting trial over the murder of Connie Ridgeway on October 23, 2015
(

Since their April 29 escape from Lauderdale County jail in Florence, Alabama, the pair had been on the run.

The Mirror told on Monday how the pair had become secret lovers before she created a bogus medical appointment for the confessed killer in order to be able to drive him from the jail.

The pair led police and the FBI on a weeks-long manhunt that saw them travel across three states.

On the day of their escape Vicky, 56, was captured on surveillance video holding the door open for a shackled White, 38, with a second angle showing them getting into a marked patrol car and driving away.

The sheriff's squad car she used and seen in the surveillance video was later found in a local shopping centre car park with her keys, cuffs and radio dumped inside.

It later emerged she had secretly bought a second-hand car for them to escape in.

It was later found abandoned in Tennessee.

Sheriff Singleton said confessed killer White, who was awaiting trial for murder when he was sprung, will now be held in solitary confinement back in Alabama.

He said: "He will be in a cell by himself. He will stay in handcuffs and shackles while he's in that cell, and if he wants to sue me for violating his civil rights, so be it.

"He's not getting out of this jail again. I'll assure you that."

Vicky was driving the pair's vehicle when it crashed after a police chase.

When officers surrounded the car, White told them to help his "wife", who had been shot.

He insisted it wasn't him who pulled the trigger.

The pair fled the Lauderdale County Jail and then changed vehicles, driving to Tennessee before dumping that car and picking up another.

It's unclear what their plan was before they were caught. They were found in Indiana after a tip from James Stinson.

He told how he became suspicious last week when he saw a car sticking out of one of the bays in the motel where they were staying.

Stinson told police last Wednesday about his concerns, but nothing was done despite a patrol car attending.

He said: "They sent a cop out. The cop says, 'Well, there ain't nothing I can do. It's not reported stolen.'

"He ran the plates. Then he left and came back. He looked in it again.

"He found a gun lock in the seat and said, 'Oh my God, there's a gun lock, but there ain't no guns around.'

Witnesses say that Vicky, who was five feet tall, had been seen entering and exiting the motel room in a wig.

She later withdrew £90,000 in cash from her bank account.

When police apprehended the couple, Vicky was still alive but died in hospital a couple of hours later.

Previous : Owner “distraught” at being ordered to change “inappropriate” name of racehorse
Next : Tiger Woods and Phil Mickelson decisions made as PGA Championship list is confirmed