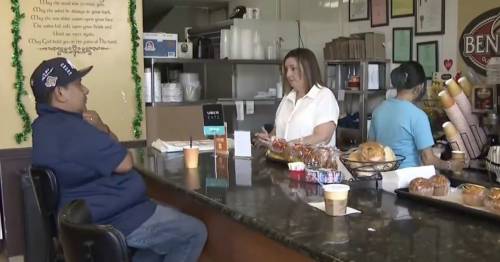 A woman who had been kidnapped was saved after sending a rescue note on a food delivery order.

Employees at the Chipper Truck Café were shocked when they received an order that had 'please call the police' in the 'additional instructions' box.

Staff at the eatery in Yonkers, New York, didn't know what to do – but the owner decided it would be best if they called the police just to be safe.

They didn't hear anything back, but then the next day they learned that Kemoy Royal, 32, was arrested and charged by the NYPD over the kidnapping of a 24-year-old woman.

The note was confusing, but staff called the police anyway
(

What would you have done if you found the note? Let us know in the comments…

Staff at the café received an order for an Irish breakfast sandwich and a cheeseburger, with 'please call police, his going to call me when u delivered come with the cones please don’t make it obvious' written at the bottom.

Despite the confusing message, staff leapt into action and notified the authorities.

Speaking to CBS New York, cafe worker Alicia Berme said: "People normally put notes like, ‘Can you leave it in my driveway? Can I have extra syrup in my order? Can I have an extra soda?’ But never something like this."

Owner Alice Bermejo said: "The message came in, and the girls read it and they called my husband to see what they should do. He told them, 'let’s call the police, we can’t take any risk or chance.'"

They then prepared the order and sent it on its way and they heard nothing more until the next day when they got a call from a police officer.

Alice added: "A detective had called and said there had been an arrest made and that the girl was safe, and we were like, we’re so happy…so happy."

They also posted an update on the Cafe's Facebook page, saying: "This morning around 5 am a girl was saved from a five-hour hostage situation.

"She ordered a delivery through Grubhub to our restaurant and added this note. Our staff responded immediately and called the police and she got saved.

"I’ve often heard of this happening but never thought it would happen to us. Thankfully we were open and able to help her.

"A big thank you to the police for their fast response."

According to authorities, Royal was arrested on Sunday morning and charged with rape, strangulation, criminal sex acts, unlawful imprisonment, sexual abuse, criminal possession of a weapon, assault and menacing.

Royal was also charged in relation to an earlier incident on June 15 with attempted rape, sexual abuse and assault on a 26-year-old woman, police added.