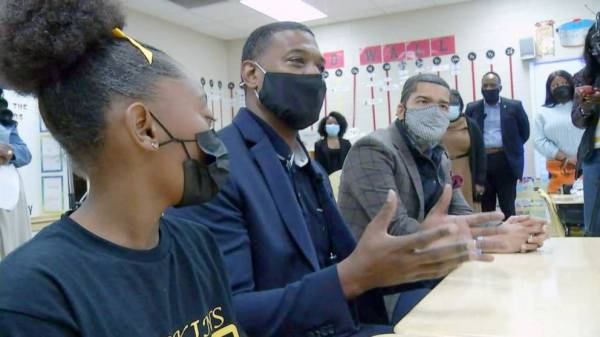 Every day, more than 400 students at Wilkins Elementary School in Jackson, Mississippi, are forced to leave the classroom to use portable restrooms outside. The city’s crumbling water infrastructure has led to low water pressure, which makes the toilets in the school building virtually unusable.

“We have challenges with the infrastructure with our water and having access to clean water, water that is running. Having access to restrooms that are housed within the walls of our building and not having to go outside is a challenge for us — a huge challenge,” Cheryl Brown, the principal of Wilkins Elementary School, told ABC News.

She said students lose up to 20 minutes of critical class time, three times per day, because they have to take outdoor bathroom breaks.

But since young children are prone to accidents, educators and custodial staff keep buckets nearby to manually flush the indoor toilets when the students can’t make the walk outside.

“We talk about things being equitable. There is nothing equitable about my boys and girls having to go outside every single day to relieve themselves …That’s degrading. It’s inhumane on all levels,” Brown said. “It is not acceptable, but unfortunately, it is the norm for us right now.”

“Try, as we might, there are lots of really smart people, hardworking people committed to the students, doing every doggone thing that they can all day, every day. Everybody’s all in. But are the children getting a fair shake? Absolutely not,” Greene said.

A city in crisis

The challenges at Wilkins elementary are reflective of the infrastructure woes that plague residents across Jackson.

“We are the poster child for a community that suffers from environmental justice issues,” said Jackson Mayor Chokwe Antar Lumumba.

“This serves as a cycle of humiliation, where people are humiliated by their inability to have a basic resource like water, unable to bathe as they need to, unable to clean their homes and clean all of the things and all the surfaces that need to be cleaned,” Lumumba added.

While testing concludes the city’s water is safe to drink, Lumumba said the outdated system can cause low water pressure that is ineffective at preventing toxic sediments and bacteria from contaminating drinking water.

“The challenge that Jackson has dealt with over the course of time has primarily been in our distribution system. When pounds per square inch (PSI) goes down in our system, which operates off of pressure, it is not sufficient to get water to the furthest points that it has to travel. Then ‘boil water’ notices are issued.” Lumumba said.

The Jackson mayor attributed decades of divestment and a lack of shared resolve to prioritize rebuilding the city’s water infrastructure for its current state of decay. He said that without state and federal interventions, “It’s not a matter of if these systems will fail, but rather when these systems will fail.”

“Our revenue, or what we receive isn’t sufficient to meet our needs. And so that’s why we need greater support,” Lumumba said.

ABC NewsLow water pressure in the south Jackson, Miss. area causes the toilets at Wilkins Elementary School to be virtually unusable. At least three times a day, students are taken outside the use the portable restrooms, causing disruptions in their learning.

Jackson is one of many American cities hoping to receive new federal investments from the infrastructure bill to upgrade its aging water system.

The estimated $459 million of federal funding that Mississippi expects for water improvements across the state is less than half the $2 billion that Lumumba said he needs in Jackson.

“It will not be [enough]. However, it is a start and we are appreciative of any resources,” Lumumba said.

The Biden administration has centered equity as a major pillar of its infrastructure agenda; however, the promise of fair distribution of funds in under-resourced communities will be largely left to the states to allocate.

In a GOP-led state like Mississippi, which has a history of divestment and underfunding in low-income and minority areas, some south Jackson residents worry about whether federal funding will trickle down to their communities as the state committee decides where to distribute funding.

“Our residents are keenly aware of that history and understand that we’re in a fight,” Lumumba said. “Communities like Jackson, Mississippi, where we can’t simply depend on a state legislature to do what’s right and fund Jackson as it needs to be funded, we have to make certain that there is accountability.”

While kicking off an environmental justice tour across the South on Nov. 15, Michael Regan, the Environmental Protection Agency (EPA) administrator, told ABC News that the Biden administration’s Build Back Better agenda will ensure that federal funding will be distributed equitably in communities that need it most.

“I want to partner with local mayors, governors and elected officials to be sure that as we’re allocating these precious resources, and that they go to projects that are ready to accept and benefit those who need them the most,” Regan later added.

“If I was a wealthy woman, I would fix this infrastructure myself, because they deserve it. The students think they are the cream of the crop because they are,” Brown said. “This water crisis does not define them.”