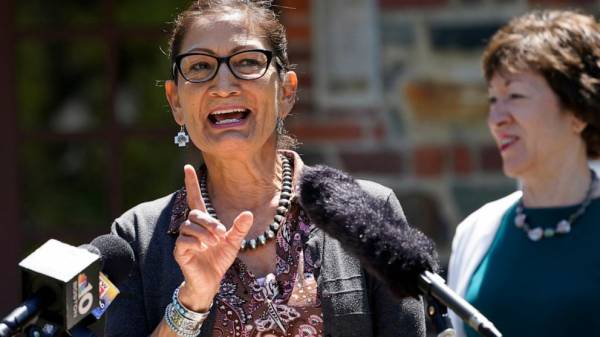 The American West is gripped by the worst drought in modern history, including most of western Colorado. The northern part of the state is experiencing deadly flash flooding and mudslides after rain fell in areas scarred by massive wildfires last year. Fires are burning across the West, most severely in Oregon and California, while the drought stresses major waterways like the Colorado River and reservoirs that sustain millions of people.

The drought and recent heat waves in the region that are tied to climate change have made wildfires harder to fight. Climate change has made the West much warmer and drier in the past 30 years and will continue to make weather more extreme and wildfires larger and more destructive.

Haaland’s three-day stay in Colorado includes her first trip Friday to the Bureau of Land Management’s new headquarters in Grand Junction, established by the Trump administration in 2019. The agency’s move from Washington, D.C., produced an outcry from critics who said it gutted the office. Haaland opposed the move as a member of Congress.

The agency overseen by the Interior Department manages nearly 250 million acres of public lands, most of which are in the West. Polis and Colorado’s congressional delegation have urged Haaland to keep the office in Grand Junction.

Haaland’s visit comes as a U.S. Senate panel deadlocked Thursday on President Joe Biden’s pick to oversee the land agency amid allegations she stonewalled a 1989 investigation into the sabotage of an Idaho timber sale.

The 10-10 tie in the Senate Energy and Natural Resources Committee set up a floor vote on the nomination of Tracy Stone-Manning. It would take every Senate Republican plus at least one Democratic lawmaker to block her confirmation in the evenly divided chamber.

Haaland is visiting as severe and intense dry periods sweeping areas of the West over the last several years have resulted in more intense and dangerous wildfires, parched croplands and a lack of vegetation for livestock and wildlife, according to government scientists.

They also found that the problem is accelerating — rainstorms are becoming increasingly unpredictable and more regions are seeing longer time intervals between storms since the turn of the century.

Nieberg is a corps member for the Associated Press/Report for America Statehouse News Initiative. Report for America is a nonprofit national service program that places journalists in local newsrooms to report on undercovered issues.