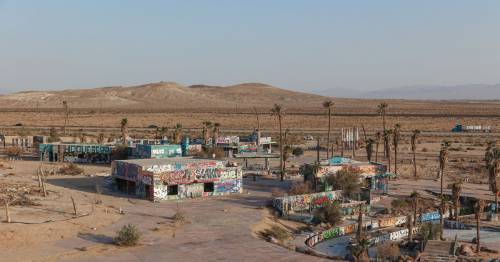 Eerie photographs of an abandoned waterpark which has laid dormant in the desert for nearly 20 years have been shared – after the site was listed for $11 million.

Earlier this month, photographer Shaun decided to visit the Lake Dolores Waterpark in California, US, after hearing reports of the sale.

The abandoned park – which featured in US television shows including Top Gear America – is currently in a dilapidated state following its permanent closure in 2004.

This came after a rocky history including a serious accident that led to a former-employee becoming paralysed, together with three re-opening and subsequent closures.

Seventeen years after it was abandoned, the current state of the former family favourite has been captured in the photographs taken by Shaun, who described the abandoned waterpark as "an incredibly surreal scene".

In one image, the entrance to the dilapidated park can be seen almost entirely covered in graffiti – a theme which continues through the site, having clearly been frequented by visitors since its closure.

In another shot, litter can be seen scattered across the grounds – including what appear to be spray paint cans.

What do you think about this story? Sign in and let us know in the comments below

Nature has started to take over the site, while litter can be seen scattered across the grounds as well
(

Meanwhile, nature has started to take over the abandoned site, with overgrown trees throughout the park.

In an aerial shot, the barren land surrounding the park can be seen – stretching out into the distance.

A crumbling slide can be seen in the background of one image, curling around a hill and covered in dirt.

Many of the park’s slides were sold years ago, leaving large empty spaces in the once-bustling park.

“I’ve visited the park several times over the years since it was first abandoned, and each time it is slightly more decayed and weather-beaten – not to mention covered in spray paint,” Shaun, who is in his 30s and lives in northern Nevada, told Jam Press.

“This particular visit was in mid-September 2021 after I'd heard the property was listed for sale for $11 million – which kind of seemed like a joke, as it is so damaged it's hard to imagine making any functional use of the structures and remains of the old waterpark that are still standing."

There are large amounts of graffiti throughout the site
(

The Raise the Stakes Photography's owner added: “A large waterpark sitting abandoned in the arid Mojave Desert is an incredibly surreal scene, and it's great to see people turn it into essentially a playground and guerrilla art gallery for those others who are willing to hop the fence and explore it.

“The state of decay is part of the whole thing, and knowing it won't exist forever – whether it becomes some fancy development like the owner is hoping for with listing it for sale, or eventually just reverts to massive lot of sand like much of the other parcels out here – just makes it something to appreciate if you can catch it the window of time that it exists in this state.”

The waterpark was nicknamed "the fun spot of the desert"
(

The 251-acre park is located in the Mojave Desert and was built by local businessman Bob Byers, who named it after his wife, Dolores, opening to the public in 1962.

Nicknamed the ‘fun spot of the desert’, in its heyday it was chock full of waterslides, zip lines, a lazy river, bumper boats and a go kart track.

It closed in the 1980s due to legal and financial problems, later reopening as Rock-a-Hoola Waterpark in 1998, but a year later an accident involving an off-duty employee led to a law suit and a $4.4 million judgement against the park.

Have you got a story that you think we should feature? Email us at webnews@mirror.co.uk

The employee had slid into an inadequately filled pool and was paralysed from their injuries.

Finally, it was reopened in 2002 as Discovery Waterpark – but closed permanently in 2004, leaving many of its structures to crumble, though most of the park’s slides were sold to other waterparks.

Now, the formerly popular site is for sale with Samina Mahmud at a listing price of $11 million – and includes permission to develop the property for any commercial use.