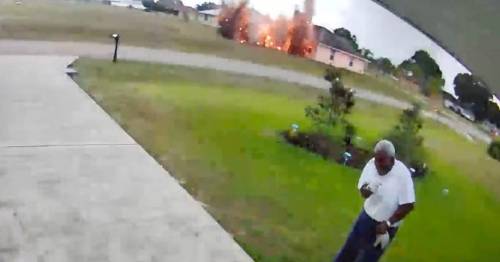 This is the incredible moment a man jumps in fear as a massive lightning bolt strikes his neighbour's garden.

Rod Murphy of Sebring, Florida, had gone outside to turn off the sprinklers in his garden as it was forecast to rain.

And as he was walking back inside, his Ring doorbell camera caught the moment lightning strikes his neighbour's land and a flaming fireball erupted from the ground.

Mr Murphy told Fox13 : "Lightning is nothing to play with.

"It wasn't raining. It was nice and warm. It was cloudy, but that was it. And then boom!"

This is the moment lightning strikes Rod Murphy's neighbour's garden

He added: "You're standing here and you get this big vibration and I thought that was it," he said. "Only two things happen when you get hit by lightning: you die or you get knocked out, you don't know what's going to happen. And I thought I was a goner."

Denice was in bed at the time and was shocked when she saw the video.

She said: "I heard a kaboom! It literally sounded like a bomb had exploded.

The lightning strike caused a fireball to erupt from the ground

"That's when we were like, oh my goodness, this is horrible and funny at the same time."

It is not immediately clear if anyone was hurt or what the damage from the strike was.

It comes as a bolt of lightning dubbed a “mega flash” that shot nearly 500 miles across three US states and has set the record for the most far-reaching strike in history.

The enormous bolt occurred in the southern US in April 2020 and extended 477.2 miles, or 768 kilometres, between clouds in Texas, Louisiana and Mississippi.

The rare low-rate horizontal flash beat the former record set in Brazil in 2018, by almost 40 miles.

The distance, which meant the strike was called a “mega flash”, was equivalent to the distance between London and Hamburg.

The lightning strike left a cloud of smoke

Another recent World Meteorological Organization (WMO) record was set in 2020 when a lightning bolt over Uruguay and northern Argentina lasted 17.3 seconds.

Lightning does not typically last for longer than a second, or stretch further than 10 miles, Randall Cerveny at Arizona State University, told the New Scientist.

Rather than moving from sky to ground, as a regular strike would the lightning moved from cloud to cloud.

Previous : Cat owner wins £100k after pet accused of trespassing and scaring other animals
Next : Woman feared murdered by ex found to have died in shower sex act, inquest hears