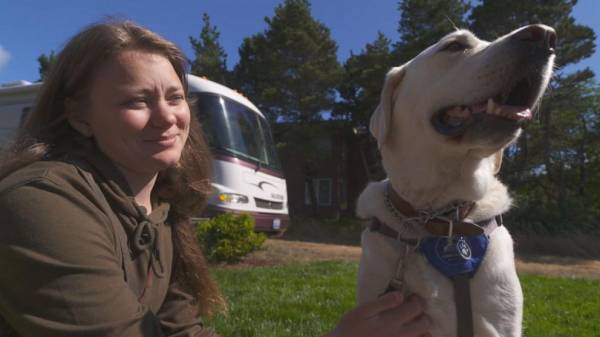 Natalie Tapio has been living with a chronic seizure disorder, but with her service dog Dexter by her side, managing her condition has become a little easier.

He will alert her when she’s about to seize.

Tapio started experiencing catatonic seizures, a form of epilepsy, in 2014, which caused periods of semi-consciousness that rendered her unable to move. Eventually, she was suffering multiple, potentially debilitating seizures a day, that would happen at any time. Tapio’s doctors soon identified abnormal brainwaves after performing an EEG.

“The seizures were so unpredictable and silent, usually, and so there always has to be someone very attentive close by,” Tapio said. “[My] mom and I were basically inseparable. She would come into the bathroom with me when I needed to bathe or do anything. Really … wherever I went, she went.”

Her life changed three years ago after she learned about seizure alert dogs and eventually met Dexter.

“[Dexter] will alert me and then dial a dog phone, which has my parents’ phone numbers on it, and then [he] retrieves a pouch which will have any necessities for me, like medication, water [and] my cell phone,” she said.

Lisa Tapio, Natalie Tapio’s mother, found out about seizure alert dogs through a family member and began to research them, eventually coming across Little Angels. After Natalie Tapio submitted her medical information, she was accepted into the program.

Once Dexter was paired with Tapio, his first task was learning to paw her leg, alerting her when she was on the verge of a seizure. To do this, Lisa Tapio was asked to collect her daughter’s “seizure scent” by swabbing Natalie’s hands and the inside of her cheeks before, during and after a seizure. Dexter was trained with those scents and in 2018, he was ready to meet his new owner.

Dexter was raised by what some might consider an unlikely group of trainers: inmates at the California Correctional Women’s Facility in Chowchilla, California. Some of the inmates there are volunteers with Pups Uplifting Prisoner’s Spirits, or PUPS. The prison program is run by the non-profit Little Angels Service Dogs, a nationwide team that trains service dogs to help people living with disabilities and disabling conditions.

ABCDogs in training with the Pups Uplifting Prisoner’s Spirits (PUPS) program at the California Correctional Women’s Facility in Chowchilla, California.

It was at the prison that ABC News met the group of women, all convicted felons, who’ve been training the dogs that might one day save people’s lives. Many of the women said the program has presented them with an opportunity for personal redemption.

“This isn’t just about training a dog,” said Amy Davis, an inmate at the prison. “[We] are training service dogs that save lives, and it’s about what the service dogs do to us to help us grow and continue to grow, and to heal our own wounds. You can’t be in this program and not grow. It doesn’t work [like that].”

ABCAmy Davis is an inmate at the California Correctional Women’s Facility in Chowchilla, California.

Through the PUPS program, inmates have helped train dogs that have assisted medical technicians, people with autism, people with psychiatric conditions and those who are deaf or hard of hearing.

Dana Froomin, the prison program manager for Little Angels Service Dogs, admitted that she was initially concerned for the dogs safety when she was tasked with starting the PUPS program in 2017. Her concerns waned, she said, when she met the inmates, and has found the work to be rewarding.

The dogs graduate from their training after 12 to 18 months and then are sent to one of two Little Angels ranches in San Diego, California, or New Hampshire. Once they arrive, they go through advanced training to perfect their skills before they are eventually paired with a recipient or released from the program.

Any inmate can apply to participate in the program, says Froomin. Once they submit an application, they are selected based on three main criteria: physical and mental health, commitment level and their interests. Once selected, inmates sign on for a two-year commitment where they care for and train a dog.

ABCInmate Amber Ingram is the lead trainer with the PUPS program.

Inmate Amber Ingram, the lead trainer in the program, believes that PUPS helps her to deal with the guilt and shame she feels after she was convicted for the second-degree murder of her 5-year-old son, Braeden. Ingram said she her son was killed by an abusive boyfriend.

Ingram said that she protects the dogs no matter what and it is her way of not only remembering her son but honoring him, too.

“I can’t allow anything bad to happen to this dog,” she said. “If someone were to want to kick my dog, I’m jumping in front of it.”

To Natalie Tapio, Little Angels and the women at the PUPS program are saving lives, she said.

“People with epilepsy often have this constant kind of cloud over their head or worry in the back of their mind of, ‘When will the next seizure happen? Where will I be? What will I be doing,’” she said. “I don’t need to have that anymore, and so that’s very freeing.”