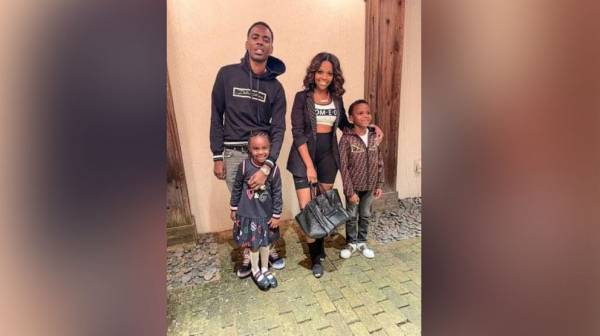 After the tragic killing of rapper Young Dolph, his longtime partner, Mia Jaye, was left to pick up the pieces.

Jaye, who shares two children with Dolph, spoke out about the pain that her family is going through one day after police announced the capture of two suspects connected to his murder.

“It’s been extremely difficult just having to pick up the pieces and to find the strength for my children,” Jaye told ABC News Live’s Linsey Davis in an exclusive interview on Wednesday. “Now that he’s no longer here, it’s just very tough for me to be strong for them and be strong for myself because he — you know, Adolph was my soulmate.”

Courtesy Mia JayeYoung Dolph and Mia Jaye are pictured with their children, Tre and Ari.

Young Dolph, whose given name was Adolph Robert Thornton Jr., was shot and killed in Memphis, Tennessee, on Nov. 17 while visiting Makeda’s Homemade Butter Cookies, a bakery the rapper was known to frequent. He was 36.

Two men were arrested and indicted on first-degree murder charges in connection with the killing of Dolph, the U.S. Marshals Service announced on Tuesday evening. A third suspect was charged on Wednesday with being an accessory to the murder.

Jaye and Dolph, who had been together for nearly a decade, share a son and a daughter — 7-year-old Tre and 4-year-old Ari — and had been planning their wedding when the rapper was killed, she said.

“They stole my future,” Jaye said, adding that over the past few years, the Memphis rapper had “made the sacrifices” he needed to make as a celebrity who travels a lot to be “present” with his family and they were looking forward to celebrating their “love story” with their children.

Dolph’s tragic death was not the first time that Jaye’s life had been shaken by gun violence.

Her brother, Jeremey Jerdine, was shot and killed in May 2020 while he was working as a car salesman. A month later, a Memphis man was arrested and charged with first-degree murder for the fatal shooting.

At the time, Jaye launched the “Black Men Deserve to Grow Old” campaign through her lifestyle brand, Mom•E•O, to tackle the issue of violent crime in the Black community and support families who have lost husbands and fathers to violent crime.

Jaye said that she didn’t realize that by launching the campaign to support her brother’s family and other families impacted by violent crime, she would be preparing for her own journey.

In her first messages after the rapper was killed, Jaye shared a video on her Instagram account of Dolph helping his daughter Ari with a late-night workout along with the words, “Question is… How am I ever going to tell my babies that daddy is never coming home?”

Since the killing of Dolph, the campaign has received national attention and become a rallying cry to bring attention to the generational trauma that is caused by gun violence in Black communities.

Jaye said that she has received an “outpouring of support” from the public, Dolph’s fans and celebrities, which has kept her “uplifted” as she deals with the pain.

“I’m turning this pain into purpose right now,” she said. “And so I’m very thankful for the community starting the conversation of what can we do to lengthen the lives of Black men in America?”

Dolph’s murder is the latest in a string of killings of prominent rappers over the past few years.

Compton rapper Slim 400 was shot and killed on Dec. 9 hours after he shared a tribute to Dolph, whom he had collaborated with in the past.

Over the past few years, Nipsey Hussle, Pop Smoke, King Von, Mo3 and most recently, Drakeo The Ruler, were killed through violent crime.

Asked what can be done to stop the cycle of violence, Jaye pointed to investing in mental health in the Black community and “restoring the Black family.”

“Mental health in the Black community is something that we must address,” she said. “So many people are walking around traumatized, they have bottled up anger, they have bottled up emotion … they make rash decisions. So finding ways to really, really heal people mentally, I think that’s a start.”

Courtesy Mia JayeMia Jaye started the “Black Men Deserve To Grow Old Campaign” to bring attention to the issue of gun violence in the Black community.

Through her brand, Mom•E•O — which means “mom and CEO” — Jaye works to empower Black women and their role as mothers in their families.

Dolph was honored at a public memorial at the FedEx Forum in Memphis last month, where fans and community members gathered to pay tribute to the slain rapper one month after his death.

Jaye and her children shared emotional tributes and remembered him as a devoted father.

At the memorial, Jaye reflected on Dolph’s “selflessness” and his devotion to his children and said that she fell in love with him for his “heart of gold” and his “benevolent spirit.”

Joe Rondone/The Commercial Appeal via USA Today NetworkYoung Dolph’s long time partner Mia Jaye and their children Tre Tre and Ari speak to the crowd gathered during a celebration of life tribute for late rapper at FedExForum on Dec. 16, 2021 in Memphis, Tenn.

Ari remembered how much she loved playing with her father and said he is “still in my heart,” and she will “keep thinking of him for forever and ever.”

And Tre spoke at the memorial and said his dad raised him and “trained me to be a good man when I grow up.”

“Since he had [died], I’m gonna make it up to the whole world,” Tre said, “and I’m gonna be the greatest person you’ll ever know.”

Jaye told ABC News that she would be “honored” if her son turns out to be just like his father.

“He was a very charismatic, compassionate, kind-hearted soul,” she said. “He was gentle. He was a great, awesome father.”

Previous : Portland Trail Blazers’ Damian Lillard plans to have surgery to address abdominal injury, sources say
Next : British Council worker jailed for spying by Iran is back in the UK