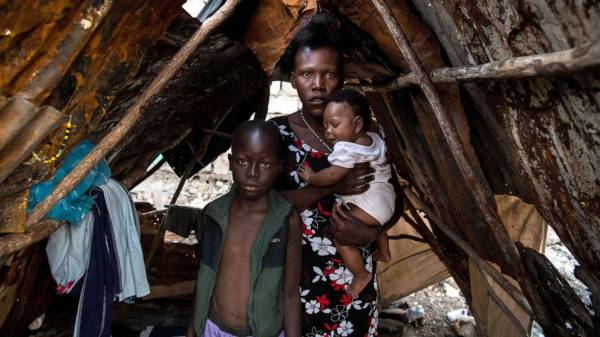 When Haiti won its independence nearly 200 years ago, it came at a hefty price — an estimated $21 billion today.

The country spent the next century paying off the debt to its former slave owners, France.

It’s a financial conundrum that those experts and historians say have helped keep some formerly colonized countries impoverished: the demand by former slave owners and colonizers for pay in exchange for independence.

The French recognized Haiti’s independence in 1825 but in return demanded a hefty indemnity of 100 million francs, approximately $21 billion (USD) today. It took Haitians more than a century to pay off the debt to its former slave owners and lenders including the City Bank of New York, experts who spoke with ABC News said.

“By forcing Haiti to pay for its freedom, France essentially ensured that the Haitian people would continue to suffer the economic effects of slavery for generations to come,” said Marlene Daut, a professor at University of Virginia specializing in pre-20th century French colonial literary and historical studies.

Money that could have gone toward erecting a country was channeled to France, Daut said. And France had already profited immensely from slaves producing sugar and coffee, said Alyssa Sepinwall, a history professor at California State University San Marcos.

Since 2004, the bicentennial of the Haitian Revolution, Haiti has unsuccessfully sought compensation from France. After Haiti was hit by a devastating earthquake in 2010 that left approximately 250,000 people dead, international activists urged the French president to reimburse Haiti’s “independence debt” in the form of disaster relief — an amount totaling $20 billion. The government has yet to respond to these requests.

The Elysee, the official residence of the President of the French Republic, told ABC News in a request for comment: “there’ll be no reaction from Elysee on that matter.”

The country’s GDP remains extremely low at $1,149.50 per capita and nearly 60% of Haitians currently live in poverty. Even though the country has finished paying off its debt and interest by 1947, its economy has not advanced significantly because it is particularly vulnerable to natural disasters and corruption.

Ralph Emmanuel Francois, a Haitian and CEO of a social enterprise in Haiti, said the debt left a gaping hole in Haiti’s economy and believes France should pay reparations to Haiti. “I’m saying that they also have a responsibility about what they did to us and how they, you know, stole our economy that we could use for our benefit,” Francois said.

A similar tale: Jamaica asking to zero out the balance

Jamaica, another Caribbean island that was a British colony from 1707 until it gained independence in 1962, is also preparing a petition asking Britain to compensate an estimate of 7.6 billion pounds to descendants of former indentured African slaves who were forced to work on sugar plantations, according to Mike Henry, a member of Jamaican Parliament.

Henry, whose private motion served as the basis for the petition, said his motion is about addressing the human rights abuse former slaves had to endure and added that the motion is first to pursue a political approach in asking reparations for chattel slavery.

The motion has since been approved by the National Commission on Reparations which examines cases for reparations for descendants of slaves in Jamaica.

Jamaica was considered the richest British colony of the time and slavery was regarded as the key to wealth. A Cambridge report on legacies of British slave ownership found that 15 to 20% of wealthy British directly benefited from slavery. After the abolition of slavery in 1835, the British government compensated its slave owners with 20 million pounds, which is worth 2 billion pounds today.

An international push to address legacies of slavery

The death of George Floyd at the hands of law enforcement reverberated on a global scale, prompting the U.N. human rights chief to inspect the issue of racism across nations.

Chandan Khanna/AFP via Getty Images, FILE.A family stands inside a makeshift shelter built on the site of their home which was burned during gang war activity, on May 25, 2019 in Port-au-Prince, Haiti.

A report published by U.N. High Commissioner for Human Rights, Michelle Bachelet in June, stated that there is a “long-overdue need to confront the legacies of enslavement, the transatlantic trade in enslaved Africans and colonialism and to seek reparatory justice.” Discussing the report further, the human rights chief called on all countries to “stop denying racism…. confront past legacies and deliver redress.”

France has “amnesia” when it comes to dealing with its past about slavery, history professor Sepinwall said.

“This is so long ago and I think that’s one reason why there’s not been a push among French citizens to say we need to be accountable for this,” said Sepinwall. “The political will is not there in France for this to happen sadly because not enough people recognize what happened.”

There is reason to be skeptical about the U.N.’s efforts, Sepinwall said, because there were often gaps between its rhetoric and action.