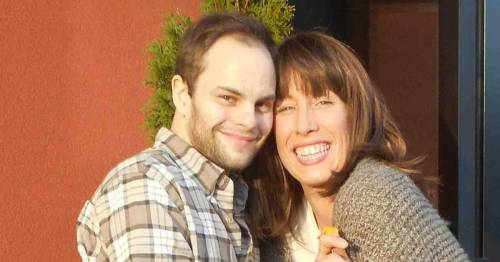 A mother and son who were forced into hiding after having 'mind-blowing' sex blamed their relationship on Genetic Sexual Attraction (GSA).

Ben Ford, who was adopted at birth, was reunited with his biological mum Kim West after sending her a letter in 2013.

Kim disturbingly admitted she started having sex dreams about her son after he reached out to her as part of a quest to find his biological family.

Ben ended up leaving his wife for Kim, who grew up in the UK, after they met up and had sex.

Kim said they had an 'instant bond' and blamed their relationship on GSA – a phenomenon when sexual feelings develop between two family members who first meet as adults.

The term GSA was coined in the US in the 1980s by Barbara Gonyo, who founded a support group after her experience with the son she met 26 years after adoption.

The pair, who had 'mind-blowing' sex, went into hiding after their affair became public
(

It has been dismissed as pseudoscience by some experts, although psychologist Corinne Sweet said she had come across it as a therapist.

The New Day previously reported her saying: "GSA is a phenomenon I've come across both as a therapist and someone who writes about people's experience of fostering and adoption.

"At a genetic level we are conditioned to find people who look like us attractive, in the first few seconds of meeting someone, we make a judgement about whether they are friend or foe, and whether they can help us reproduce our genes.

"We have an almost tribal connection with family members with similar features.

"At the same time people who are adopted or fostered feel deeply rejected. They have experienced a profound wound which isn't easily healed – even if they are able to meet the person who gave them up, however good their reasons for doing so.

"So when a son meets his birth mother, he feels a great rush of need. There's an attraction and a longing there, and when it's combined with the appeal of genetic similarity, it becomes a very powerful and complex cocktail which is incredibly seductive."

Ms Sweet said Kim may have 'enveloped her son sexually' in a bid to protect herself from his rage and sense of betrayal.

She added: "It is always our responsibility as parents to hold the boundary and say, I am the adult in this situation and you are the child.

"I understand the force of their feelings, but I would suggest Kim have therapy to try to unpack what is going on in their relationship.

"And I would say that having a child is extremely unwise. What are you going to tell that child when it's old enough to ask about its parentage? It's a no no."

Kim and Ben, from Michigan, US, were forced into hiding after their relationship became public due to their state's sex laws.

Ben was 32 when he spoke out about the relationship.

He and Kim could face 15 years in prison and be added to the sex register for life over their incestuous relationship.

In the UK, sex with a parent, child, sibling, nephew, niece, uncle or aunt is defined as incest and is illegal under the Sexual Offences Act 2003 with a maximum two-year penalty.