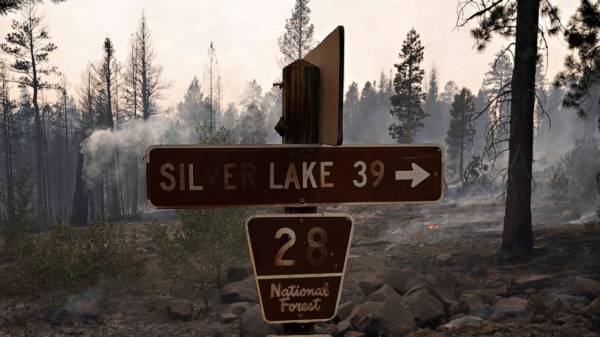 The heat emitting from the dozens of wildfires ravaging the West is creating thunderstorms without rain in regions desperate for moisture.

The pyrocumulus clouds, or fire-driven thunderstorm clouds, are created as large pockets of heat and smoke from the Bootleg Fire in southern Oregon rise and meet a relatively cool atmosphere.

NOAANational Oceanographic and Atmospheric Administration satellite image shows smoke rising from the Bootleg Fire in southern Oregon on July 13, 2021. The Bootleg Fire is the largest wildfire so far this year in the U.S., having already burned nearly 500 square miles of forest and grasslands.

The thunderstorms typically don’t contain rain because any moisture that forms usually evaporates on the way down. Vegetation parched by the megadrought is more likely to burn if struck by lightning, and gusty winds from the storms can spread fires more rapidly.

This year’s dry season, exacerbated by the megadrought and climate change, has created a tinderbox, with the relative humidity often as low as 10%.

At least 87 large wildfires are burning in 13 states, with more than 2.5 million acres burned so far this year.

Oregon Department of Forestry via APAn active fire is seen along a ridge at the Grandview Fire near Sisters, Ore., Sunday, July 11, 2021. The wildfire doubled in size to 6.2 square miles, forcing evacuations in the area, while the state’s biggest fire continued to burn out of control, with containment not expected until November.

The Bootleg Fire has burned through 388,360 acres and is 32% contained. The fire is threatening about 5,000 homes and has caused thousands of households in Lake County, Oregon, to evacuate.

Evacuations also are occurring near Lake Tahoe due to the Tamarack Fire, which had burned through nearly 40,000 acres by Wednesday morning and was 0% contained.

The Dixie Fire in Butte County, California, has scorched more than 85,000 acres and was 15% contained.

The haze from the smoke-filled skies even traveled east, causing air quality alerts in several East Coast cities, including New York, which marked its poorest air quality in several years.

More than 750,000 acres have burned in 2021 than at the same time last year, and fire season is far from over. The wet season typically begins in October.