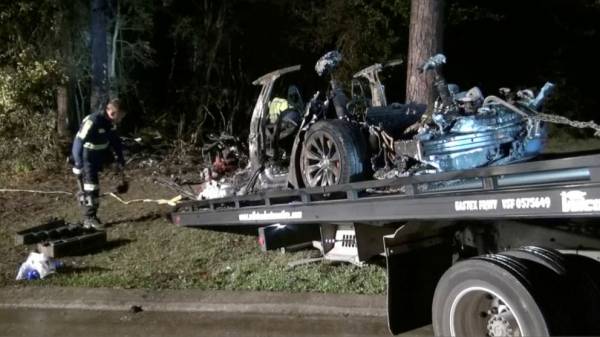 ‘He will be dearly missed by so many’: Doctor among 2 victims in fatal Tesla crash

The two victims in the fatal Tesla crash that occurred this past weekend in Texas have been identified as William Varner and Everette Talbot, the local medical examiner’s office said Wednesday.

The fiery crash involved a 2019 Tesla Model S car, and local authorities said there is no indication that anyone was in the driver’s seat when the car swerved off the road and hit a tree.

The vehicle subsequently burst into flames and burned for over four hours even as firefighters doused it with 30,000 gallons of water. Eventually, firefighters had to let the fire burn itself out.

The remains of a Tesla vehicle are seen after it crashed in The Woodlands, Texas, April 17, 2021, in this still image from video obtained via social media.

Varner, 59, was an anesthesiologist who worked at Memorial Hermann The Woodlands Medical Center. The hospital’s senior vice president remembered him as a “tremendous human being” in a statement to ABC News on Wednesday.

“Dr. Varner was a tremendous human being who personally impacted many throughout our Memorial Hermann The Woodlands Medical Center family over the years,” Justin Kendrick, the medical center’s SVP and CEO said. “Our thoughts and prayers go out to his entire family, and also to those who had the privilege of working and serving alongside him in various capacities. He will be dearly missed by so many.”

Tony Good, the vice president of communications at U.S. Anesthesia Partners, Varner’s official employer, told ABC News on Wednesday that they “were saddened to hear of the death of one of our physicians over the weekend.”

“Dr. Varner spent his life caring for others, and now we are focused on caring for his colleagues and family, helping them to cope with this sudden and unexpected loss,” Good added.

Further information about Talbot’s background was not immediately available. ABC News’ local affiliate KTRK-TV in Houston reported that he was a 69-year-old engineer and friends with Varner.

The remains of a Tesla vehicle are seen after it crashed in The Woodlands, Texas, April 17, 2021, in this still image from video obtained via social media.

Earlier this week, the National Transportation Safety Board and the National Highway Traffic Safety Administration announced in separate statements that both federal agencies were sending teams to help investigate the fatal crash.

The vehicle had an autopilot option, and investigators are working to determine if it was in use at the time of the crash.

Harris County Precinct 4 Constable Mark Herman told ABC News earlier this week that one victim was found in the front passenger seat and the other in the backseat — meaning that nobody appeared to be in the driver’s seat operating the vehicle.

Tesla’s chief executive Elon Musk replied to a Twitter comment on a Wall Street Journal article about the crash earlier this week to say that he doesn’t believe autopilot was on during the crash.

“Data logs recovered so far show Autopilot was not enabled & this car did not purchase FSD [Full Self Driving software],” Musk wrote on Monday. “Moreover, standard Autopilot would require lane lines to turn on, which this street did not have.”

On Wednesday, the electric vehicle tycoon responded to another tweet featuring a video of automotive engineer Sandy Munro touting the safety of Tesla’s autopilot function.

“Sandy Munro knows what he’s talking about,” he wrote.

Meanwhile, Constable Herman told KTRK that investigators are “100% sure” that no one was driving the vehicle at the time of the crash.

Previous : Boys who robbed teens and forced them to carry out sex acts at knifepoint avoid jail
Next : Ukraine to allies: West must act now to ensure no new Russia military offensive