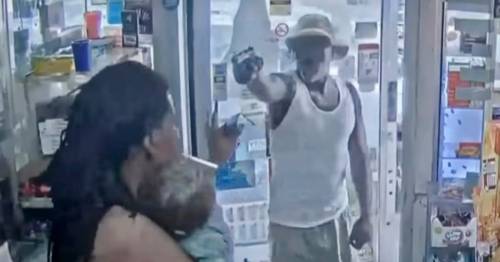 The moment a gunman stormed a petrol station and targeted a man cradling a baby has been caught on chilling CCTV footage.

Detroit cops have released stills of a surveillance camera clip showing an armed suspect pointing his weapon at a terrified shopper holding his child to his chest in a gas station over the weekend.

The gunman – wearing a tan bucket hat and a white shirt – entered the store after an argument with the dad outside, it has been claimed.

In the images, the dad is seen juggling his baby in one hand as he hits out with his left in an apparent bid to shield his child and knock away the handgun.

The dad juggled his baby in his right hand while striking out at the handgun with his left, which police think may have caused the weapon to jam

By striking the gun, the victim may have caused it to jam and potentially saved himself and his baby, police said.

FoxNews said the two men had been involved in some kind of altercation outside in the moments before the armed spat.

When the suspect pulled the gun, the victim was just two to three feet away, police said.

Cops are now searching for the suspect in relation to a charge of aggravated assault.

The men reportedly had an argument before entering the store

It comes after a 15-year-old was killed and several others injured following a shooting in Washington DC.

A police officer was also shot and injured when gunfire broke out at a street event in Northwest DC on Sunday evening (June 19).

DC police Chief Robert Contee said that three civilians, two adults, one juvenile and one police officer had been shot during the incident.

The injured police officer was transported to hospital in a "stable condition", DC Police Union said on Twitter. He had sustained a gunshot wound to the leg, Chief Contee said.

The shooting reportedly took place during a "Juneteenth" celebration – a federal holiday in the United States commemorating the emancipation of enslaved African Americans.

At a press conference, Mayor Muriel Bowser appealed for calm and expressed her grief at the killing.

"A child is dead," she said. “We need some accountability here."

Several firearms were recovered from the scene by responding officers, Chief Contee noted.

Police are currently trying to locate a suspect.