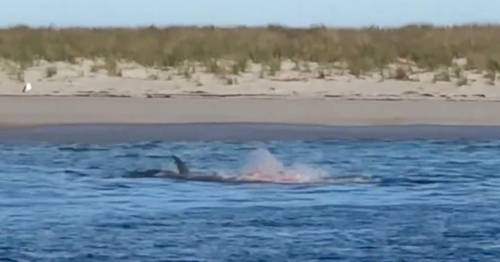 Video footage shows the shows the big fish changing the colour of the water in the brutal battle for survival.

The short flick is shared on Instagram account @a_whiteshark and documents the attack on the coast of Monomoy Island on the eastern coast of America.

It shows the vicious shark thrashing in the water before the surface turns calm again, the Daily Star reports.

The post said: "Even though we have past peak season for white shark activity along the Cape Cod coast, it is important to note that white sharks are still in the area.

The shark thrashes in the water as it attacks

"Thank you to R. Nossa for sharing this footage that he took of a seal predation on November 7 near the southern tip on Monomoy Island."

Other posters commented on the video and were astonished at the power of the vicious big fish.

Great white sharks can grow up to 20ft in length and weigh up to 6,600lbs, are known to frequent the east coast of America, with thousands estimated to be in the area.

The sea goes calm after the great white's attack

And it is thought a Brit was mauled to death by a great white shark in Australia.

Paul Millachip, 57, was swimming in Western Australia where he regularly takes a dip when a beast described by witnesses as 14ft long “came out of the blue” while he was at the beach.

Only goggles believed to belong to Mr Millachip were recovered in a search for his body.

The Mirror told how shark had been spotted in the North Sea at Hartlepool.

The 10ft beast was seen by a group of fishermen who were astonished after spotting a 10ft long shark just north of Teesside.

The men had baited their hooks and were out fishing when they suddenly saw a huge fin in the water nearby.

Andrew Grabham, 67, and his son John, 34, were on the water in the North Sea from Hartlepool catching fish when they spotted the big fish.

Further footage of great whites was reported this month when the Mirror told of pictures and footage emerging of battered sharks covered in bite marks.

The shark was filmed swimming near the Neptune Islands in South Australia in remarkable footage which showed the battles great whites endure in fights with other predators.

Previous : Extreme psoriasis sufferer had 80% of body covered with painful red flaky skin
Next : Crime against disabled people is rising and advocates say more needs to be done