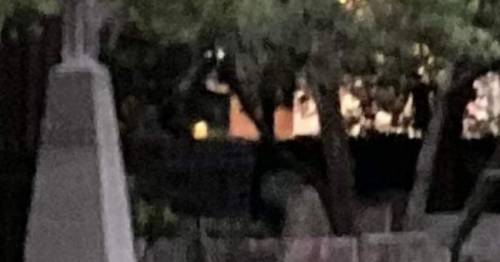 An eerie graveyard photo has captured the 'ghost' of a woman who died in childbirth 'bent over her baby's grave'.

Sue Howard Hardy, from Charleston in South Carolina, US, mysteriously died in 1888 – six days after her and husband Gaston’s child was stillborn – with reports suggesting she passed away due to complications from childbirth.

And now for the second time she has been allegedly caught on camera pictured walking through the graveyard of St Philip’s Church in Charleston, which was built in 1680, the Daily Star reported.

In 1987, she was captured by local amateur photographer Harry Reynold when he saw an image of a figure, with a type of clothing covering some her body, bent over the baby’s grave – and was left baffled.

Harry wanted to find out more about the photo as he reached out to Kodak who examined the picture but they failed to explain or disprove what was in the image.

Remarkably, 35 years later, a woman called Cassie Alexis Lahn has taken the latest picture while on a ghost tour of the city.

The image shows a lady in 19th-century garb walking through the graveyard, with her head bowed.

Ms Lahn said: “I took this photo as our guide was telling us about a woman named Sue Howard Hardy.

“If you Google her name there is a photo of her from the 80s in what appears to be a white dress just like that one.”

Nearly every ghost tour in Charleston stops outside the gates of the cemetery to tell the story of Sue Howard Hardy.

Typically, they offer a copy of the 1987 photograph to tour-goers, to be passed around and examined.

However, they do offer one disclaimer, with numerous reports of pregnant women having problems after handling the photograph.

Some have felt as though they were choking, others felt sick to their stomachs.

Facebook followers were quick to nod their approval of the picture, with one person writing: “Wow! Gave me chills”, while another wrote: “Oh my my my, I see the lady as clear a day.”