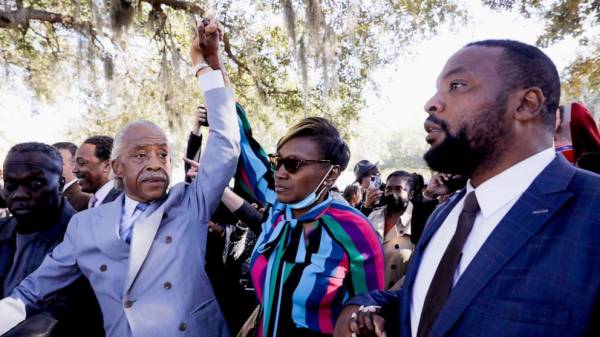 A chant of “Ahmaud Arbery” erupted outside the Georgia courtroom, where three men were found guilty of his murder Wednesday after a weekslong, closely watched trial.

“It’s been a long fight, it’s been a hard fight, but God is good,” Arbery’s mother, Wanda Cooper-Jones, said during a press briefing following the verdict, which came nearly two years after the 25-year-old Black man was fatally shot while jogging in February 2020. “To tell you the truth, back in 2020, I never thought this day would come, but God is good.”

Her son “will now rest in peace,” she added.

“Today is a good day,” his father, Marcus Arbery, told the crowd gathered outside.

Stephen B. Morton/Pool via APAhmaud Arbery’s father Marcus Arbery, center, his hugged by his attorney Benjamin Crump after the jury convicted Travis McMichael in the Glynn County Courthouse, Nov. 24, 2021, in Brunswick, Ga.

Rev. Al Sharpton, who showed up in support of the family throughout the trial, said the verdict was historic.

“Let the word go forth all over the world that a jury of 11 whites and one Black in the Deep South stood up in the courtroom and said that Black lives do matter,” he said during the briefing.

Marco Bello/ReutersRev. Al Sharpton and Wanda Cooper-Jones, mother of Ahmaud Arbery, raise their hands outside the Glynn County Courthouse after the jury reached a guilty verdict in the trial of William “Roddie” Bryan, Travis McMichael and Gregory McMichael, charged with death of Ahmaud Arbery, in Brunswick, Ga., Nov. 24, 2021.

Ben Crump, attorney for Arbery’s family, said the moment is “not a celebration” but a “reflection.”

“The spirit of Ahmaud defeated the lynch mob,” he told the crowd to cheers.

The Cobb County District Attorney’s Office prosecuted the case. Latonia Hines, executive assistant district attorney for the office, thanked the family for their “confidence” in getting justice for Arbery.

“It has been a long road, and we are so happy that we’re able to be here at this end of this road,” Hines said during the briefing. “We commend the courage and bravery of this jury to say that what happened on Feb. 23, 2020, to Ahmaud Arbery, the hunting and killing of Ahmaud Arbery, it was not only morally wrong, but legally wrong, and we are thankful for that.”

“The verdict today was a verdict based on the facts, based on the evidence, and that was our goal, was to bring that to that jury so that they do the right thing,” she told the crowd. “When you present the truth to people and they can see it, they will do the right thing. And that’s what this jury did today in getting justice for Ahmaud Arbery.”

Following the verdicts, attorneys for Gregory McMichael, who was found not guilty of malice murder but was convicted on the remaining charges, including the felony murder counts, said they will appeal. Laura Hogue said in the courtroom that she was “very disappointed.” Frank Hogue said they will appeal — a process that can start once sentencing is done.

The McMichael’s neighbor, William “Roddie” Bryan, 53, who recorded the incident on a cellphone, was found guilty of three of the felony murder counts and a charge of criminal intent to commit a felony. His attorney, Kevin Gough, told reporters he was obviously “very disappointed” in the verdict.

“But we have to respect that verdict. That’s the American way,” he said.

He said he plans to file a motion for a new trial on behalf of Bryan next week.

Defense attorneys had argued that Arbery was shot in self-defense when he resisted a citizen’s arrest. Prosecutors meanwhile alleged the defendants pursued and murdered Arbery because of incorrect “assumptions and driveway decisions” they made that the Black man running through their Satilla Shores neighborhood had committed a burglary.

Reaction from Georgia and beyond

President Joe Biden reacted to the jury’s decision, saying Arbery “should be here today” and that “the verdict ensures that those who committed this horrible crime will be punished.”

“While the guilty verdicts reflect our justice system doing its job, that alone is not enough. Instead, we must recommit ourselves to building a future of unity and shared strength, where no one fears violence because of the color of their skin,” he said in a statement.

Vice President Kamala Harris also released a statement, saying the verdicts “send an important message,” but there is still “work to do.”

She also criticized the defense counsel, saying they “chose to set a tone that cast the attendance of ministers at the trial as intimidation and dehumanized a young Black man with racist tropes,” adding that despite those tactics, the jury still delivered these verdicts.

Georgia leaders also reacted in support of the jury’s decision.

“Ahmaud Arbery was the victim of a vigilantism that has no place in Georgia,” Gov. Brian Kemp said in a statement on Twitter. “As legal efforts continue to hold accountable all who may be responsible, we hope the Arbery family, the Brunswick community, our state, and those around the nation who have been following his case can now move forward down a path of healing and reconciliation.”

Georgia Attorney General Chriss Carr said the verdict “brings us one step closer to justice, healing and reconciliation for Ahmaud’s family, the community, the state and the nation.”

Sen. Raphael Warnock, D-Ga., said the verdict “upholds a sense of accountability, but not true justice.”

“True justice looks like a Black man not having to worry about being harmed — or killed — while on a jog, while sleeping in his bed, while living what should be a very long life,” he said in a statement. “Ahmaud should be with us today.”

Rep. Nikema Williams, chair of the Democratic Party of Georgia, said in a statement that the verdicts mean “we must double down on our efforts to fight hatred, and we will not stop until no American’s life is cut short due to bigotry or reckless vigilantism.”

“I am praying for the Arbery family as they continue grieving their insurmountable loss, for Brunswick as the community works to heal, and for the country as we carry on in the march towards justice,” she continued.

Political leaders and civil rights organizations also voiced support for the verdict while acknowledging that more needs to be done against what was characterized as “vigilantes acting with racial animus” by Congressional Black Caucus Chair Joyce Beatty.

“The Congressional Black Caucus will continue to champion criminal justice reform and common-sense gun control measures because vigilante justice has no place in our society. Our thoughts and our prayers remain with the family and loved ones of Mr. Arbery,” Beatty said in a statement.

Anti-Defamation League CEO Jonathan Greenblatt said this was a “significant moment of accountability and justice.”

“The men who murdered Mr. Arbery were tried and found guilty of the crime, sending a resounding message across Georgia and the United States that racial violence — especially that committed under the false guise of vigilantism — is unacceptable,” he said in a statement.

“Across the country, we see local and grassroots organizations leading the fight for this transformation,” the organization said on Twitter. “We join them in re-imagining a future where Black people can thrive free of police violence or vigilantism. The true measure of justice is not in a verdict, but in making a future where people don’t live in fear of racialized violence. We will not stop doing the long hard work to achieve this future.”

Despite the verdict, the case “leaves a deep and painful wound on our nation’s soul,” the National Urban League said in a statement.

“Thanks to faithful prayer and a skilled prosecution, we are relieved to know that the jury was able to see the truth and hold these killers accountable for the senseless murder of Ahmaud Arbery,” the statement said. “Still, we must dedicate ourselves to shining the light of scrutiny on what happened in this case to ensure that racially-motivated vigilante violence never again is condoned or tolerated.”