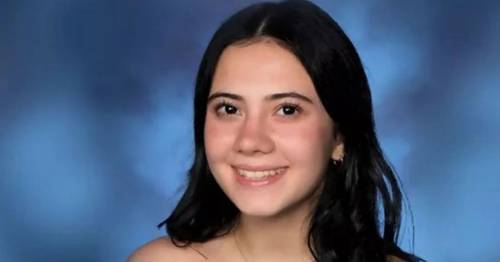 A girl was killed and three teenagers rushed to hospital after horror car crash.

Suffolk County Police said two of the boys were seriously injured in the smash which saw the convertible ending up in the back court lawn of a home in Commack, Long Island, New York, in the US.

The four were in the car with its top down when the driver moved to avoid another car before losing control of the vehicle.

Dominic Crocitto, 17, was steering the Mustang which police say slid in to the lane opposite before it hit a Jeep going in he opposite direction.

The convertible turned over and landed on the back lawn of a home police say.

The devastating scene of the crash
(

The 17-year-old girl Isabel Carella was pronounced dead at the accident location.

Crocitto and passenger Joseph Gibiino, 16, suffered serious injuries after being thrown from the open-topped vehicle

He was rushed in an ambulance to Stony Brook University Hospital and Gibiino was taken to Good Samaritan Hospital Medical Center.

Suffolk County Detective Lieutenant Michael Crowley said investigators did not think alcohol or drugs played a role in the accident according to Newsday.

“The preliminary cause of the crash appears to be distraction on the part of the operator of the Mustang, but we have no evidence to indicate that speed was a factor at this time,” Crowley said.

Three of the four teenagers in the Mustang are students at Kings Park High School.

“I am deeply saddened to inform you that earlier today there was a very serious car accident on Indian Head Road in Commack that involved four Kings Park High School students – one Senior and three Juniors,” Superintendent of Kings Park Schools Timothy Eagen said in a message to parents.

"Counsellors at the high school will help students come to terms with the crash and the death of Carella."

The dead teenager was reported to be passionate about dance.

“She was a confident dancer, but she was humble, even though she had very good abilities,” owner Sara Jean Haas told the outlet. “She [was] a very positive girl.”

The KIngs Park High School PFA has started a fundraiser to offset expenses for the Carella family.

It reads: "Her friends lovingly knew Isabel as Issie.

"Issie was a Kickline, Chorus and Theater Member, among other things.

"Recently, in May, she received the Musical Theatre Award for choreographing the dance numbers for our Spring Musical.

"In addition, she was a talented dancer with the Sarah Jean Dance Company. Issie was preparing for her Senior Prom and High School Graduation later this month.

"Issie was going to attend Suffolk Community College to further her education."