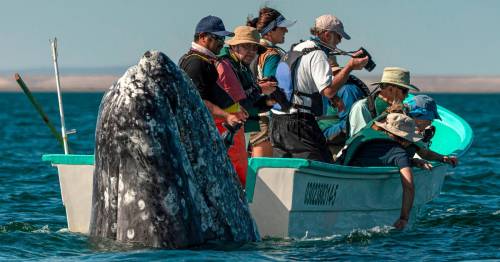 Whale watchers are caught napping instead of snapping as their giant quarry sneaks up unnoticed behind them.

This is the hilarious moment a boatload of camera-toting tourists almost missed the moment of a lifetime when a sneaky whale pops up behind their boat as they looked the wrong way.

The group were pictured waiting patiently with their cameras poised when the 40-foot marine mammal appeared just a few feet away.

But there was no regretful blubbering as luckily the sightseers turned around just in time to spot the grey whale, which can weigh up to 60,000lbs, before she disappeared back into the water.

The funny scene was captured by director and photographer Eric J Smith during a trip to San Ignacio Lagoon in Baja, Mexico. 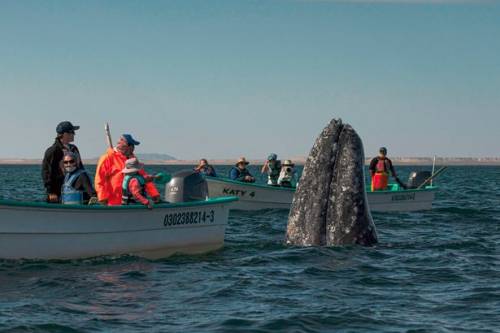 The 49-year-old from Los Angeles said: "She slowly and silently stuck her head high above the water to look around.

"I was in another panga a few dozen feet away and caught the moment right before everyone realised she was so close.

"When everyone turned around, she quickly sank below the surface. 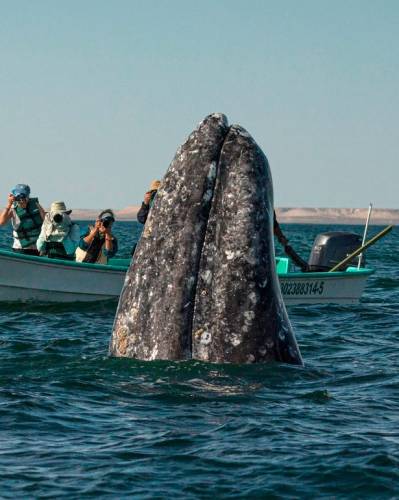 The whale popped up to take a look around
(Image: @esmith_images / Caters News Agency) 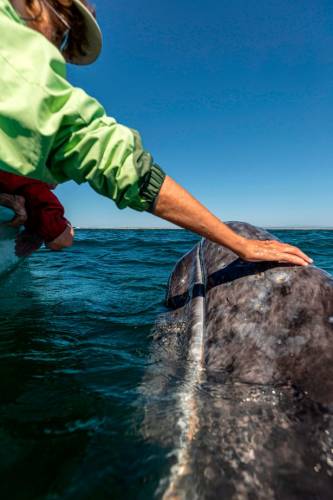 "Whale photography involves a lot of luck, but the key is to always be on alert and ready.

"On a whale watching voyage, it is easy to get complacent because there is a lot of waiting.

"It seems like the moment you let your guard down, a spectacular breach occurs."

Last week, a grey whale was recorded to have swum the longest distance ever in a marine vertebrate – more than 16,700 miles – over halfway around the world.

The male spotted off Namibia in 2013 is the first grey whale ever recorded in the Southern Hemisphere.

You could say after eventually spotting the whale, the sightseers were given the krill of their lives.Ends