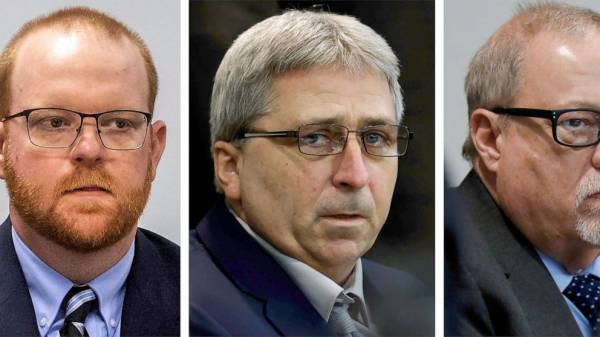 WARNER ROBINS, Ga. — A Georgia sheriff’s deputy was suspended and faces being fired over comments posted on social media after a judge sentenced three white men to life imprisonment in the killing of Ahmaud Arbery, news outlets reported.

Reacting to a story on WGXA-TV’s Facebook page after the men were sentenced on their murder convictions in the shooting of Arbery, a Black man who was jogging through a neighborhood, someone wrote: “That criminal arbery still got the death penalty though.”

The comment was later deleted, but screenshots were shared with news outlets and the Houston County Sheriff’s Office, which investigated and subsequently suspended longtime deputy Paul Urhahn.

A letter from Sheriff Cullen Talton, posted on his department’s Facebook page, said the action was taken because of conduct that discredited the department and was unbecoming of an officer, WGXA reported.

Urhahn will be fired effective Jan. 20 unless he appeals, the sheriff’s letter said.

Chief Deputy Billy Rape said Urhahn had been disciplined in the past for other violations, but his firing was based solely on “the destruction of public respect for himself and our department through all of the social media outrage.”

Urhahn could not immediately be reached for comment Thursday. It appeared his Facebook page had been deleted, and no telephone number was listed in his name.

Greg and Travis McMichael grabbed guns and jumped in a pickup truck to chase Arbery after spotting him running in their neighborhood near Brunswick on Feb. 23, 2020. Their neighbor, William “Roddie” Bryan, joined the pursuit in his own truck and recorded cellphone video of Travis McMichael firing close-range shotgun blasts into Arbery, 25.

The three were sentenced to life in prison Friday, with a judge denying any chance of parole for the McMichaels, who are father and son.