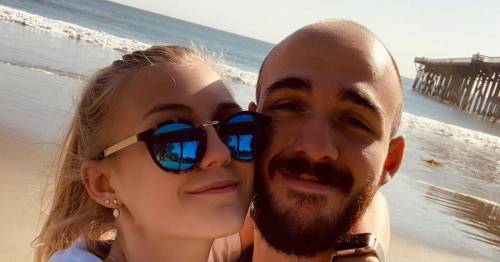 The fiancé of a 22-year-old woman who went missing after travelling around the US says he "hopes she is re-united with her family".

Brian Laundrie finally broke his silence on Tuesday after releasing a statement through his legal team.

Through his lawyer he said he "understands a search has been organised in Wyoming" and called the disappearance an "extremely difficult time" for the family.

Gabby Petito, from New York, has not been seen since she left a hotel with her boyfriend Brian Laundrie, in Salt Lake City, Utah, on August 24.

She had been making a social media blog as she travelled around the United States with her fiancé before her disappearance.

Nicole Schmidt, the mum of missing Gabby, holding a picture of her daughter
(

After telling her family the couple were going to Grand Teton National Park in Wyoming there has been no contact.

Laundrie had returned home to where the couple lived in Florida with their Ford Transit van.

Now, ABC7 reports that he has issued a statement through his lawyer Steve Bertolino.

He said: "This is an extremely difficult time for both the Petito family and the Laundrie family. I understand that a search has been organised for Miss Petito in or near Grand Teton National Park in Wyoming.

Officers are investigating the disappearance
(

"On the advice of counsel, the Laundrie family is remaining in the background at this juncture and will have no further comment."

The outlet reports that after the statement the family of the missing woman said they were "going through the worst moments of their lives".

They said in their own statement: "[We] beg the Laundrie family to not 'remain in the background' but to help find who Brian referred to as the love of his life.

"How does Brian stay in the background when he is the one person that knows where Gabby is located? The Schmidt and Petito family implore Brian to come forward and at least tell us if we are looking in the right area."

Gabby was reported missing by her mum Nichole Schmidt last Saturday and an investigation was started by Suffolk County Police Department.

She has been called “very, very free spirited” by her father Joseph Petito, who moved to Vero Beach, Florida to be closer to his daughter in June.

Her and her partner had been sharing their trip, which began on July 2, on social media and were building up a following under the name “Nomadic Statik”.

They had converted a 2012 Transit van to sleep in and were giving regular updates to their trip on YouTube and Instagram.

Gabby is described as 5ft 5in, with several tattoos, including one on her forearm reading “let it be”.

Previous : Japan manufacturers’ mood falls to 5-month low in Sept – Reuters Tankan
Next : Student, 21, killed himself at hospital after being unsure over becoming a doctor