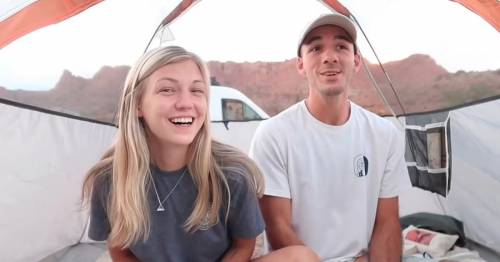 Gabby Petito dead: Pals of woman killed on road trip say she ‘must have been so scared’

Devastated pals of Gabby Petito who was killed during a US road trip have reacted to hearing she was strangled to death – with one saying "she must have been so scared".

The 22-year-old and her fiance Brian Laundrie were on a cross-country trip when she vanished on August 26 which sparked a massive hunt before she later was found dead at Bridger-Teton National Forest in western Wyoming.

Now a coroner has said that she died through strangulation.

While she had been blogging upbeat stories and videos of her "van life," police reports and witness statements allege that the trip was filled with arguments and possible domestic abuse.

Teton County Coroner Dr Brent Blue, whose office had already ruled Ms Petito's death a homicide, said she was killed about three to four weeks before her body was found on September 19.

Mr Laundrie, 23, has been missing for nearly a month and has been called a "person of interest" by police.

With news that Ms Petito was strangled it has left some of her pals distraught.

Alyssa Chen said how terrified Gabby must have been in her final moments before she was killed in the Wyoming national park.

"I wonder what was going through her mind, knowing she was probably about to die. She must have been so scared."

Ms Chen added: "She didn't deserve to die that way."

Ms Petito and Mr Laundrie started their trip in early July from New York's Long Island, where her parents live.

But Mr Laundrie returned without her on September 1 to his family's North Port home, in Florida, and driving Gabby's van.

A total of 10 days later her mother Nicole Schmidt reported her missing.

Mr Laundrie, who had refused to talk to North Port police, has not been seen since September 14, when his parents later said he was going for a hike in the nearby Carlton Reserve wilderness area.

Police using divers, tracking dogs and helicopters, have turned up no sign of him in the swampy, alligator-infested wilderness area.

Josh Taylor, a North Port Police spokesperson, told CNN that nothing significant linked to Mr Laundrie has been found in the 25,000-acre Carlton Reserve but said that searches will continue until police receive more information.

The manhunt for Mr Laundrie remains without leads and there is believed to be only a 50 per cent chance the missing man is still alive, police have said.