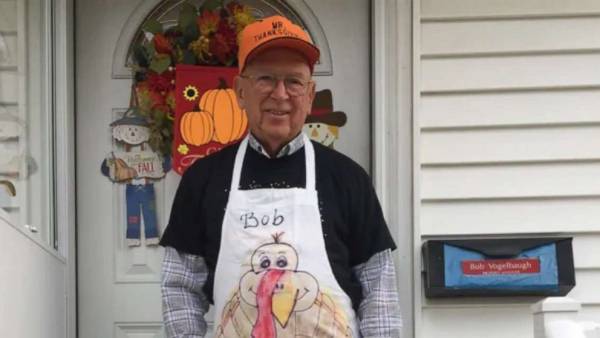 All are welcome at “Mr. Thanksgiving’s” dinner table.

For more than 50 years, Bob Vogelbaugh, a former grocery store owner in Moline, Illinois, has made sure that his community is well fed on Thanksgiving Day.

“I did the turkey. My mom did side dishes for a number of years,” he said.

Every year, with the help of hundreds volunteers, Vogelbaugh hosts a free Thanksgiving dinner.

“It’s not a charity dinner,” he said. “It’s just a Thanksgiving gathering of friends and people you don’t know and some people have become friends through this over the years.”

It’s a tradition he started in 1970 to invite some of his customers who were going to be alone for the holiday to dinner.

“I started asking them, ‘Well, what are you going to be doing for the coming holiday?’ And it was just almost like a unison answer was just another day to be alone,” Vogelbaugh said. “So this 20 watt bulb went off in my head, and I thought, ‘Oh, why should this be?’”

“I got these rooms down here behind the grocery store and I got a kitchen there with a stove and an oven and everything and I got a big walk-in cooler,” he continued. “So… I thought, ‘Well, I’m going to do a Thanksgiving dinner here.’”

What started as a small gathering inside his local grocery store has grown to fill an entire food court at the South Park Mall.

“I used to have a live band and then there was dancing. Then I went to a DJ, and so it was really a Thanksgiving party,” he said. “It’s a wonderful thing.”

The past two years with the ongoing COVID-19 pandemic, Vogelbaugh kept his tradition going but switched things up. Instead of hosting a seated dinner, Vogelbaugh and his volunteers set up tables outside so people could drive over and pick up meals.

“I figured that was hard enough for people last year … [with] families not [going] to get together because of the COVID outbreak and stuff, and so I thought we’re gonna go ahead and we’ll do a drive by,” he said.

This year, Vogelbaugh said his volunteers served 2,500 pounds of turkey and 3,500 pieces of pie to more than 3,200 people from all over the region.

“I wish there was more community dinners for people to go to,” he said. “People are so happy and gracious and they’re thankful.”

Previous : Washington faces threat of more ‘atmospheric rivers,’ floods
Next : Job seeker pitches at Tube station, gets interview in 3 hours and has job by end of week