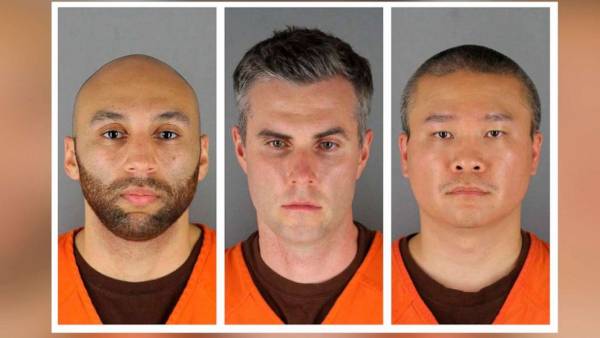 No last-minute plea deals are in the works for three former Minneapolis police officers charged with civil rights violations in the death of George Floyd, a federal prosecutor announced as the defendants’ joint trial in U.S. district court is set to begin next week.

During a hearing on Tuesday, federal prosecutor LeeAnn Bell said that while no plea deals have been offered to J. Alexander Kueng, Thomas Lane and Tou Thao, there were initial discussions of plea bargains that were rejected by defense attorneys, according to The Associated Press.

The federal trial for the former colleagues of Derek Chauvin, who was convicted in April on state charges of murdering Floyd, is scheduled to begin with jury selection on Jan. 20.

Chauvin pleaded guilty last month to federal civil rights charges stemming from the May 25, 2020, death of the 46-year-old Black man during an attempted arrest. Chauvin dug his knee into the back of Floyd’s neck for more than nine minutes despite the handcuffed and prone man becoming unconscious and losing a pulse after he repeatedly said he couldn’t breathe.

Kueng, 27, Lane, 38, and Thao, 35, all have pleaded not guilty to federal charges of depriving Floyd of his constitutional right to be free from the use of unreasonable force while acting under government authority. The officers are accused of failing to provide medical assistance to Floyd, and failing to intercede to stop Chauvin’s excessive use of force.

Magnuson granted a motion from the defense to not allow a 10-year-old girl, who witnessed the fatal arrest of Floyd, to testify in the federal case.

Lane’s attorney, Earl Gray, argued in the motion that the girl’s testimony would be used by prosecutors to invoke sympathy.

During the state murder trial of Chauvin, the girl was one of several eyewitnesses to take the stand. She testified, “I was sad and kind of mad. Because it felt like [Chauvin] was stopping [Floyd’s] breathing, and it was kind of, like, hurting him.”

Magnuson also granted a motion from Thao’s attorney, Bob Paule, to bar Minneapolis firefighter Genevieve Hansen from wearing her fire department uniform during her expected testimony in the federal trial. Paule argued that Hansen, who testified in uniform during Chauvin’s trial, was off duty and in civilian clothes when she happened upon the arrest of Floyd and was prevented by Thou from providing medical assistance to Floyd.

Paule argued Hansen could possibly bias the jury by testifying in uniform.

Magnuson denied a request from Kueng’s attorney, Tom Plunkett, to bar paramedics from testifying that Floyd was dead when they arrived at the scene, examined him and could not detect a pulse.

The judge said 18 jurors, including six alternates, will be selected to hear the case.

Magnuson expressed concerns that during the trial jurors could test positive for COVID-19 given the highly contagious omicron variant sweeping across the U.S. He urged attorneys on both sides to “move the case along” quickly to lessen the possibility of the trial being disrupted by the virus.

On Wednesday, Hennepin County Judge Peter Cahill, who presided over Chauvin’s trial and sentenced the former police officer to 22 1/2 years in prison, granted a motion from the defense to delay the state trial for Kueng, Lane and Thao. Defense attorneys had asked for the trial to be postponed due to uncertainty over how long the federal trial will last.

In his order, Cahill said he wants to meet with the attorneys in the case soon to decide on a new trial date. He said in his order that the court is open to scheduling the trial anytime between March 14 and Jan. 29, 2023. He said he expects to set aside three weeks for jury selection and five weeks for the remainder of the trial.

On Tuesday, Cahill reaffirmed that the trial of Kueng, Lane and Thao will be livestreamed, denying a motion from the defense to reconsider audio and video coverage of the proceedings, ABC St. Paul affiliate KSTP reported.