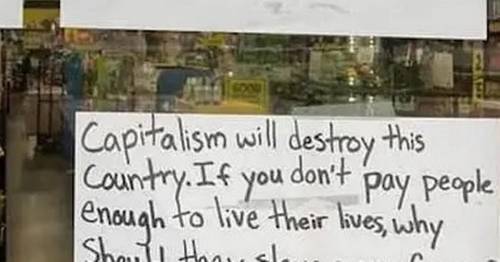 We’ve all dreamt of quitting a rubbish job in spectacular fashion, but not many of us have actually followed through with our schemes.

Several people who did leave their job in style though were at least four employees at a Dollar General supermarket in the US, who left scathing messages about their employer on the door of the establishment before they left.

In a picture posted on Twitter by @VanDurBeek, four handwritten notes can be seen stuck to the glass door, ironically right above a sign which reads “Now hiring”.

One note read: “Closed indefinitely because Dollar General doesn’t pay a living wage or treat their employees with respect.”

They posted their notes above a sign which read 'now hiring'
(

While another one said: “Capitalism will destroy this country. If you don’t pay people enough to live their lives, why should they slave away for you?”

Another note hinted any remaining employees may have gone on strike over poor working conditions.

It read: “ Google ‘General Strike’ and learn how we can take our power back! To our loyal customers who treated us with respect, thank you. We love you!”

And the final note sent special thanks to one person in particular, as it simply read: “Thank you for the sodas, Joe!”

And commenters on the Twitter post shared their own experience with the supermarket chain, insisting they have a history of making “workers suffer”.

One person said: “I remember working at dollar general. S**t hours, being on call to come in anytime, doing basically everything myself, and management stealing money and blaming and firing me for it while constantly coming up with new s**t to make us workers suffer.”

While a second commented: “Oh, I work here, and my manager works 80 hours a week in a salary position too! So basically, less than minimum.”

The picture of the messages was uploaded in response to a TikTok video which claimed more than 17 employees at a Wendy’s fast-food restaurant had quit in one day over poor working conditions.

The Dollar General walk-out initially happened earlier this year, but the picture went viral again after it was posted in response to the Wendy’s video.

Previous : Chef Anne Burrell serves up 6 appetizers to start off Thanksgiving Day
Next : Chaos as alcohol may be blocked from Christmas dinner tables over HGV driver shortage