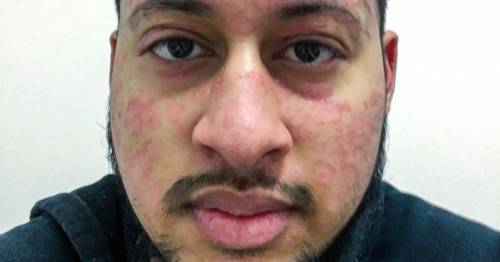 A bodybuilder who was left feeling depressed thanks to extreme psoriasis that covered 80% of his body has shared the remarkable recovery he made in just one month.

Mohammed Khan, 24, started suffering with the skin condition, that causes red, flaky, crusty patches of skin around the body, four years ago.

It started on one of his hands as a series of “red spots” and eventually spread across large parts of his body, including his genitals.

Psoriasis occurs when skin cells are replaced more quickly than usual, and flareups can be triggered by a range of problems from stress, smoking and excess alcohol.

Mohammed saw a doctor who prescribed a steroid cream, but when his skin continued to deteriorate, he was also given medication in the form of pills to take alongside the cream – which he says did nothing but worsen his skin.

Mohammed's hand before the improvement in his psoriasis
(

When he went to see a dermatologist, he says they “took one look” at his skin and said he was “more than 80% covered” in psoriasis.

He was given steroid injections on a bi-weekly basis, but decided to quit them after two rounds of injections after researching the potential side effects.

When he ceased using all medication, he found his skin got worse than ever – with the psoriasis spreading to his genitals – and he was “desperate” for answers.

“I felt really depressed – I was so young and yet, according to the experts, my psoriasis would be with me for the rest of my life,” Mohammed said.

“I felt totally socially isolated and alone because of my skin. I was living in shared student accommodation and my psoriasis made a lot of mess due to the flakes falling everywhere.

Mohammed's leg before the improvement in his psoriasis
(

“Some of the students got bothered by this mess and told me very politely to clean it up, but it still made me feel bad.

“I felt so depressed and sometimes I did think about suicide. Like most psoriasis sufferers I was always asking the question ‘why me?’ I started having dreams about falling off a building which scared me a lot at the time.”

At the beginning of 2018, Mohammed started experimenting with different diets in a bid to get his skin under control, and to help him lose weight.

He started eating a vegan diet and joined a gym – where he says other gym-goers would walk away from him when they caught sight of his flaking skin.

Mohammed's before losing weight and the improvement in his psoriasis
(

Within a year, he had lost weight and had built a dedicated workout regime including lifting weights.

He found that his skin had started to improve, but the psoriasis was sill “very visible” and covering much of his body.

Mohammed started researching online and found a support group for psoriasis sufferers, where other people with the condition recommended trying a plant-based cream.

The budding bodybuilder decided to give it a go, and within one week he found his skin improving dramatically.

Mohammed following losing weight and the improvement in his psoriasis
(

He said: “I noticed my psoriasis flakes had gone down and scaly patches felt softer and not so rough, especially the ones on my knees and elbows.

“I saw the most dramatic improvements in my facial psoriasis, which after a month had significantly decreased.”

Within one month, Mohammed’s skin had largely cleared up and he believes the serum, alongside his vegan diet and exercise programme, is to thank.

He has increased his use of the cream to two three times daily and has also cut gluten from his diet to help aid in his skin recovery.

While he finds it more difficult to manage his psoriasis during the winter months, he is careful to moisturise regularly to make sure it doesn’t deteriorate again.