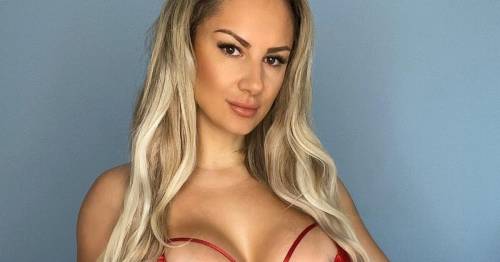 A former history teacher has told how she went from being "exhausted and crying" every night working in dangerous strip clubs to earning £150,000 a month with OnlyFans.

Monica Huldt, 37, who is originally from Sweden, moved to the US in 2015 after being dismissed by the school where she worked, when they discovered her side gig as a stripper.

She arrived on the continent with barely enough money to scrape by and for six months, she was living month-by-month, working long hours in dangerous clubs while waiting for her Green Card to come through.

Monica, who now makes around £150,000 a month, was on shift seven days a week and would go home "exhausted and crying" every night.

“I couldn’t do anything else because I was waiting for my Green Card," said Monica, who first moved to Memphis, Tennessee.

“I was on day shifts in a strip club, which are notoriously hard, and I barely made enough to pay my rent – let alone for things like food.

“I was exhausted and constantly crying.

“The thing about that type of work is that sometimes you don’t make much money and clubs like that are also not the nicest of places to work.

"There can be a lot of grabbing and it’s a very physical job."

At the same time, Monica was dealing with the death of her father who had passed away from cancer months earlier and she had a fraught relationship with her mum who she said did not approve of the stripping.

She said: “My mum in particular was horrified that I was dancing for money, we still don’t speak.

“In the months before I moved, my dad died from cancer. I felt like I had nothing keeping me in Sweden any more.

“I was very confused, upset and depressed.”

After a few months in Memphis, the model moved to Los Angeles but the struggle continued, as Monica found it hard to get any work and her mental health suffered as a result.

Monica, who dreamed of being a housewife, said: “When I say I had some bad times, I mean they were awful.

“I had no money, I was living in a very rough place and I couldn’t see a way out. A lot of the girls I worked with did escorting but I didn’t want to go down that avenue.

“I have nothing against it but by that point I was with my now husband John and when you’re in a relationship even stripping is very hard.

“You put so much into working and giving people attention, when you get home you have nothing left.

“My husband was incredibly supportive but he wasn't earning that much money either as his personal training business was only just up and running.

"More than anything he knew it wasn’t what I wanted to be doing, I was super depressed and sad.”

In 2016, OnlyFans launched and Monica’s fans on Instagram, @swedish_bella_backup, asked her if she had considered joining.

Soon after, she took the leap and was earning enough to give up stripping altogether, preferring the safety and control that the site offered in comparison.

She said: “I didn’t have a big following at that point but I had friends who helped me get followers and a lot of them started asking me if I was going to start one up.

“When OnlyFans started, I kinda jumped on that and it started to grow and grow, and then when the pandemic hit that’s when it really kicked off.

“I feel so blessed that I am where I am right now.”

Monica credits her online career for saving her life and keeping her off the streets.

She added: “OnlyFans keeps a lot of girls off the street and out of trouble and out of issues that we would normally have to deal with.

"A few weeks ago, when we were told they were going to take explicit content down, it was a really bad blow for me, I was depressed for two days.

“I saw a lot of people on Instagram laughing, saying things like 'now they have to go work at McDonald’s' but it's not a joke to me or the girls I've spoken to.

"A lot of them were worried about having to go back to escorting or back on the streets. It's a real issue.

“If OnlyFans went away a lot of girls would end up dead. It definitely saved my life."