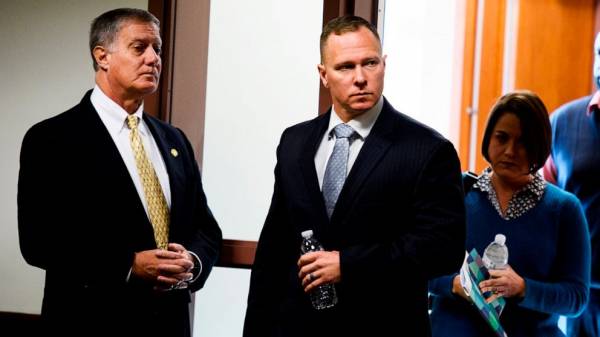 Ex-SC sheriff off to prison on 1-year misconduct sentence

COLUMBIA, S.C. — A former sheriff in South Carolina reported to prison Wednesday to serve a one-year sentence for using his power and office to pressure a personal assistant to have sex with him.

Lewis was at the state prison’s evaluation center Wednesday as officials decide where he should serve his sentence, South Carolina Corrections Department spokeswoman Chrysti Shain said.

Lewis’ lawyer has requested he be kept at a prison out of state for his own safety since he was sheriff. Shain said prison administrators are reviewing that request.

Lewis was convicted in 2019 of misconduct. Prosecutors said he hired a then 22-year-old assistant at $62,000 a year and gave the woman a county vehicle and other perks to groom her into a sexual relationship.

The sheriff’s actions were criminal because Lewis misused county money to hire a woefully unqualified person for an unnecessary position and then used county resources such as his cellphone to continue the relationship.

The South Carolina Supreme Court rejected an argument from Lewis’ attorney that the charge was vague and while Lewis’ actions were immoral, they were not illegal.

Solicitor Kevin Brackett said Lewis’ misconduct was “brazen, naked corruption” as Lewis arranged to have the assistant come to an out-of-town budget conference and put a bottle of whisky in her bag so he would have an excuse to go to her room and get it late at night.

Lewis is among at least 13 sheriffs in the state’s 46 counties who have been convicted of crimes since 2010. Those crimes have ranged from using inmates for personal labor and running a drug operation to protecting people in the county illegally from being deported and creating false police reports of stolen credit cards.

Lewis is one of five sheriffs to end up serving prison time. A sixth, former Chester County Sheriff Alex Underwood is awaiting sentencing on several federal felonies including stealing money from government programs that will likely include time behind bars.