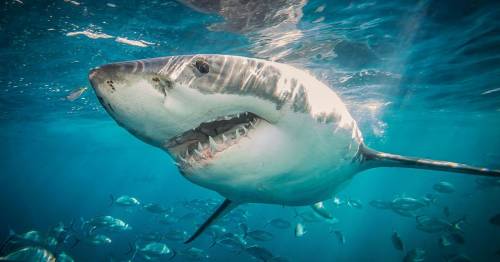 Enormous 1,000lbs shark which is 12ft in length spotted swimming off shores

A huge shark weighing 1,000lbs and spanning 12ft in length has been spotted swimming off the shores of a US state.

The hefty animal has been identified as a Northwest Atlantic white shark by a nonprofit marine research group, which detected the shark, named ‘Ironbound’, off the coast of New Jersey late last month.

Ironbound was first tagged on October 3, 2019, near the West Ironbound Island – from which it gets its name.

The island is situated near Lunenburg, Nova Scotia.

According to nonprofit marine research group OCEARCH, the shark is estimated to weigh 450 kilograms and is 3.7 metres long.

The research group tracks sharks by fitting them with an electronic tracker, which pings whenever they break the ocean surface.

Ironbound’s tracker pinged late at night, when the likelihood of swimmers out at the ocean was low.

OCEARCH’s chief scientist Bob Heuter believed the shark was likely to be around 20 years old.

“When we tagged him, he was impressive,” Mr Heuter said.

OCEARCH have a number of formidable sharks tagged – Mr Heuter said they have tagged animals as long as 5.3 metres and weighing as much as 1.8 tonnes.

According to data kept by the tracker, Ironbound has travelled an estimated 20,921 kilometres since he was first tracked.

He had also travelled between Novia Scotia and the Florida Keys a number of times.

Mr Heuter explained that sharks from the Atlantic Ocean tended to spend their summers on holiday near Canada and their winters in the Gulf of Mexico.

The migration was an adaptation to “seasonal temperature fluxes, to where the food is,” Mr Heuter said.

They theorised that the sharks mate off the coast of the Carolinas during their journey.

“Mating season is over, we think, and Ironbound is on his way north to get into some good feeding ground and bulk up again for the next year,” Mr Heuter said.

The data collected by OCEARCH is used to learn about migration patterns and uncover potentially important details about sharks and their lives.

“Sharks have been around for about 400 million years,” Mr Heuter continued.

“They in many cases occupy what's called the apex predator position, in marine food webs. Just like on land, that is an important role in terms of keeping the lower parts of the food web healthy and balanced."