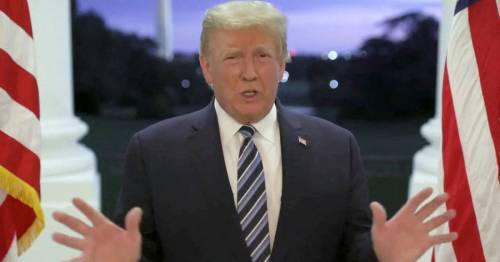 Elon Musk has said he would reverse Twitter's ban on former US President Donald Trump.

The Tesla Chief Executive made the announcement while speaking at the Financial Times Future of the Car conference as part of his plan to make permanent account suspensions a "rare thing".

The billionaire agreed a £34.5 billion takeover deal with the Twitter board last month and said at the time that as well as improving the free speech principles of the site, he was looking forward to "enhancing the product with new features". His takeover is expected to be completed later this year.

The suspension of Trump's account, which had more than 88 million followers, silenced his primary megaphone days before the end of his term and follows years of debate about how social media companies should moderate the accounts of powerful global leaders.

Trump was permanently suspended from Twitter shortly after the January 6 riot on the U.S. Capitol.

Twitter cited "the risk of further incitement of violence" in its decision.

The decision amplified his views among people on the political right, Musk said, calling the ban "morally wrong and flat-out stupid."

Speaking virtually at the Financial Times Future of the Car Summit on Tuesday, Mr Musk said tweets which are illegal or "destructive" should be deleted or made invisible, but accounts must not banned permanently.

He said: "I think there's a general question of should Twitter have permanent bans? I've talked with Jack Dorsey about this and he and I are of the same mind which is that permanent bans should be extremely rare and really reserved for accounts that are bots or spam scam accounts.

"I do think that it was not correct to ban Donald Trump. I think that was a mistake because it an alienated a large part of the country and did not ultimately result in Donald Trump not having a voice… I think this could end up being frankly worse than having a single forum where everyone can debate.

"But my opinion and Jack Dorsey, I want to be clear, shares, that we should not have permanent bans.

"Now, that doesn't mean that somebody gets to say whatever they want to say, if they say something that is illegal or otherwise, just destructive to the world, then that there should be perhaps a timeout, a temporary suspension, or that particular tweet should be made invisible or have very limited traction."

Musk said: "I do think that it was not correct to ban Donald Trump"
(

Mr Musk said the ban was a "morally bad decision" which undermined the public's trust in Twitter.

He also spoke of wanting to build trust with users of the platform by showing them "how the algorithm works" and allowing them to "suggest changes".

Trump previously told Fox News that he would not return to Twitter even if Musk purchases the platform and reinstates his account, and said he would use his own social media app called Truth Social, which launched on the Apple app store in late February but was glitchy until more recently when it began letting more users in.

There was no immediate comment from a Trump spokesperson.