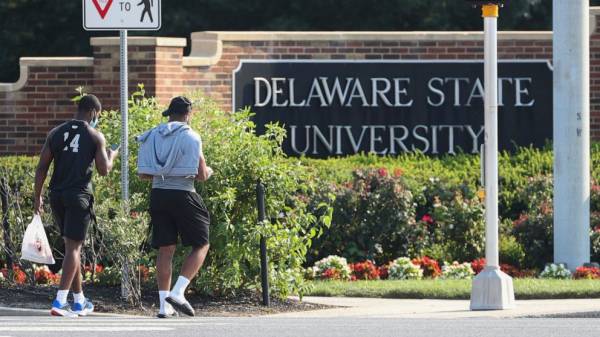 Delaware State University announced plans to file a civil rights complaint with the U.S. Department of Justice over what its president called a “constitutionally dubious” drug search of a bus transporting its women’s lacrosse team through Georgia last month.

The historically Black university intends to file the complaint next week, alleging “misconduct” by the Liberty County Sheriff’s Office, the school’s president, Tony Allen, said during a press briefing Friday.

Allen did not go into detail on the contents of the complaint ahead of the filing, but said that “from our standpoint, the evidence is clear and compelling.”

“What we believe is that the search was conducted inappropriately, and there was implicit racial bias in the search,” he said, noting that the lacrosse team is 70% African American.

The university is seeking “justice” for the student-athletes, who may choose to pursue legal action on their own, Allen said.

Liberty County deputies pulled the bus over for an alleged traffic violation that then turned into a drug search. Nothing illegal was found, authorities and school officials said.

The incident, which occurred on April 20, came to light after one of the team’s lacrosse players wrote about the search in the school’s newspaper last week with the headline, “Delaware State Women’s Lacrosse Team Felt Racially Profiled by Police in Georgia.” The player also released a video of part of the deputies’ interactions with the team.

The team’s head coach, Pamella Jenkins, also charged that it was an incident of racial profiling in interview with ABC Philadelphia station WPVI.

In response to the allegations, Liberty County Sheriff William Bowman said this week that there was probable cause for the luggage search due to an alert from a K9.

“Although I do not believe any racial profiling took place based on the information I currently have, I welcome feedback from our community on ways that our law enforcement practices can be improved while still maintaining the law,” he said.

The sheriff’s office also released body-camera footage of the incident, during which a deputy can be heard telling the student-athletes to come forward with anything “questionable.”

“Marijuana is still illegal in the state of Georgia,” he said.

Prior to conducting the search, the deputy can be heard while in his cruiser saying, “There’s a bunch of dang school girls on the bus. There’s probably some weed. Maybe.”

The university contacted Delaware Attorney General Kathleen Jennings about the incident, who this week wrote to the U.S. Department of Justice’s Civil Rights Division “urging a full examination,” she said.

In her letter, Jennings said she was “deeply troubled” by what happened.

“By all accounts these young women represented their school and our state with class — and they were rewarded with a questionable-at-best search through their belongings in an effort to find contraband that did not exist,” she wrote. “Not only did the deputies find nothing illegal in the bags; they did not issue a single ticket for the alleged traffic infraction.”