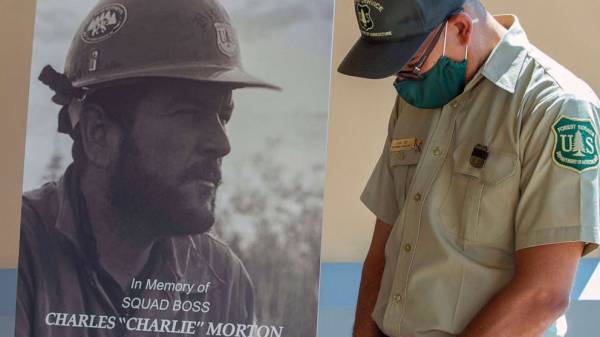 A couple whose gender reveal celebration triggered the El Dorado Fire in California last year that killed a firefighter and left 13 injured has been charged.

Ringo H.w. Chiu/APA burned structure lies in ruin during a wildfire in Yucaipa, Calif., Sept. 5, 2020. A couple whose gender reveal ceremony sparked the Southern California wildfire that killed a firefighter in 2020 have been charged with involuntary manslaughter.

The El Dorado Fire sparked on Sept. 5, 2020, when the couple and their young children set off a smoke bomb at a gender reveal ceremony at El Dorado Ranch Park in Yucaipa, at the foot of the San Bernardino Mountains.

The device ignited dry grass on the hot day, authorities said. Despite trying to douse the flames with a water bottle, strong winds fanned the fire and it ripped through the wilderness and national forest land, fueled by extremely dry conditions, Cal Fire said at the time.

The fire burned over 22,000 acres across San Bernardino and Riverside counties and forced the evacuations of hundreds of residents, officials said.

“He’s fighting a fire that was started because of a smoke bomb — that’s the only reason he’s there,” Anderson said.

Orange County Register via AP, FILESan Bernardino National Forest firefighter David Cruz attneds a memorial, Sept. 25, 2020, for Charles Morton, the U.S. Forest Service firefighter assigned to the Big Bear Hotshots who was killed in the line of duty on the El Dorado Fire at The Rock Church in San Bernardino, Calif. A couple whose gender reveal ceremony sparked a Southern California wildfire that killed a firefighter in 2020 have been charged with involuntary manslaughter.

The defendants were arraigned in court on Tuesday and entered not guilty pleas. They were released on their own recognizance.

If convicted on all counts, they could face sentences in the “lower teens to low twenties” in terms of years, Anderson said.

The charges for the couple are seen as a warning to others as much of the western U.S. remains hot and dry, with wildfires still spreading and more than 18 million Americans under heat alerts.

Previous : Labour MP used her connections to ‘jump the queue’ and get a studio flat, court hears
Next : Justices deal blow to outdated claims of child sexual abuse