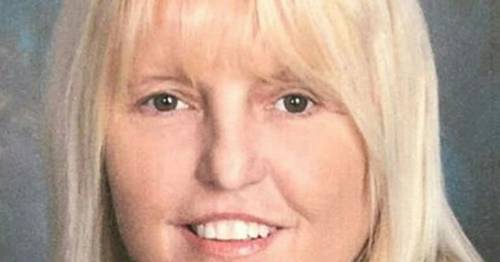 An American prison boss who sprang her murderous 6’9” lover from prison on the day of her retirement to go on the run has been captured and is in hospital after shooting herself.

Vicky White and Casey Cole White – no relation – were arrested in Indiana following a car chase that ended in a crash on Monday.

The assistant jail director shot herself after being found by the police in Evansville.

Since their escape from Lauderdale County jail in Alabama, on April 29, the pair had been on the run.

The pair had become secret lovers before she created a bogus appointment for the murder suspect in order to be able to drive him from the jail.

Casey White was described as highly dangerous by police

The lovers led the FBI on a weeks-long manhunt that saw them travel across three states.

Vicky, 56, was captured on surveillance video holding the door open for a shackled White, 38, with a second angle showing them getting into a marked patrol car and driving away.

The sheriff's squad car seen in the surveillance video was found in a car park of a local shopping centre.

It later emerged she had secretly bought a second-hand car for them to escape in, but that was later found abandoned in Tennessee.

Vicky White, pictured, who went on the run with her prisoner lover

Vicky White was transported to a hospital for treatment. Sheriff Rick Singleton said he wasn’t sure if the wounds are from the wreck or not.

Sheriff Singleton said confessed killer White “will be brought back” to his prison in Florence, Alabama.

He said: “He’s not getting out of this jail again.”

Vicky White, due to retire after 25 years the day after her disappearance, had first met Casey in 2020.

He had been brought to Lauderdale County for questioning after he wrote a letter confessing to the 2015 murder of Connie Ridgeway.

Casey White was easily recognisable due to being 6ft 9in tall

The 59-year-old was found stabbed to death in her home at the Meadowland Apartments in Rogersville, Alabama.

White said he was a paid hitman, but when charged with murder pleaded not guilty by reason of insanity.

He was already serving a 75-year sentence for a one-night crime spree in December 2015.

His night of terror included a burglary, two carjackings and multiple shootings in North Alabama and South Tennessee.

The spree left a woman injured and dog dead.

Previous : Tutor sheds 20st after years of cruel jibes and being pelted with food in the street
Next : A minke whale was spotted in Montreal. Experts worry for its safety