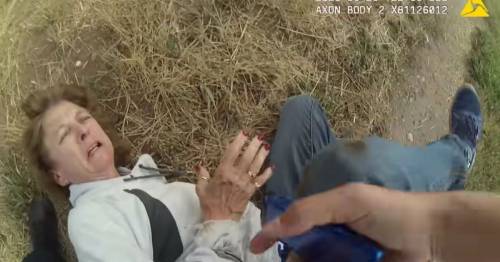 Cop jailed for brutal arrest of woman, 73, with dementia before laughing about it

A cop who is claimed to have dislocated the shoulder of a 73-year-old dementia sufferer and then laughed with colleagues about the way she was rough handled, has been jailed.

Austin Hopp twisted the arm of Karen Garner and pushed her to the floor as she picked flowers in Loveland, north of Denver, in 2020, after she had left a Walmart store without paying for goods valued at $14 (£10).

Ms Garner was then taken to a police station where she was left handcuffed for six hours in a cell, while Hopp and colleague Daria Jalali were seen laughing as they saw the bodycam footage about what happened.

Austin Hopp was filmed laughing after the brutal arrest
(

Hopp, who handcuffed Ms Garner, is heard saying: "Ready for the pop?" – an apparent reference to the pensioner's shoulder which he is claimed to have dislocated.

Watching brutal footage of the arrest, Jalali says: "It’s like live TV… Body-cams are my favorite thing to watch, I could watch livestream body-cams all day.”

The officers were seen carrying Ms Garner into a cell, speculating that she was on drugs or "losing it".

Hopp pleaded guilty to second-degree assault in March under a deal that was opposed by Ms Garner’s family and he was given a five year jail term, reported the New York Post.

He had faced a mandatory prison sentence of between 10 to 32 years under an original more serious assault charge.

A federal lawsuit presented by Ms Garner claimed that her shoulder was dislocated and the city settled the case for $3million.

Her family have said that the payout has been spent on the 24 hour care that is now needed after her case deteriorated.

Ms Garner claimed that she wanted to go back and pay for the items at Walmart and her family said that it was due to the dementia that she left without paying.

Ms Garner was left handcuffed for six hours in a prison cell without treatment, it is claimed
(

"These videos cannot be unseen or unheard. I am sorry to have to share them with the public. This will be traumatic and deeply upsetting for everyone to see.

“But as it often goes with bad police departments, it seems this is the only way to make them change.

“They have to be exposed. If I didn’t release this, the Loveland Police’s toxic culture of arrogance and entitlement, along with their horrific abuse of the vulnerable and powerless, would carry on, business as usual.”