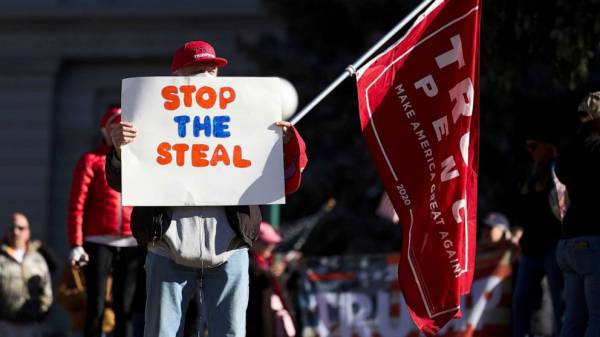 When Josh Zygielbaum left the Marine Corps more than ten years ago, he thought he would never have to wear body armor again. But now Zygielbaum is back to wearing a bulletproof vest as a Colorado county clerk — one of the many extreme measures he says he’s been forced to take as the state has emerged as a battleground in the shadowy world of election conspiracies.

Considered by many experts to be a leader in election security due to its up-to-date voting machines, its policy of recording every vote on a paper ballot, and its rigorous post-election audits, Colorado has been described by some election experts as the “gold standard for elections.” Yet despite its strong reputation, the state has recently been targeted by election denial groups as a center for baseless accusations that election workers helped steal the 2020 election from Donald Trump.

As a result, election officials and poll workers in several Colorado counties have donned bulletproof vests and undergone active shooter training for their own safety.

Zygielbaum and other officials ABC News spoke with pointed to Tina Peters, an embattled county clerk in Mesa County, accusing her of being one of the leading figures fueling the false and baseless conspiracy theories that have put Colorado in the spotlight.

Peters, who announced in February that she is running for Colorado secretary of state, has been under investigation by the FBI since November for her alleged involvement in a security breach of the Mesa County election system, according to a statement by the Colorado attorney general. In March, she was indicted by a grand jury on 11 counts of election tampering and misconduct, after authorities say the election software she used for her county wound up in the hands of a consultant, and screenshots of the software appeared on right-wing websites.

“Using a grand jury to formalize politically-motivated accusations against candidates is tactic long employed by the Democrat Party,” Peters said in a statement posted on her campaign website. “Using legal muscle to indict political opponents during an election isn’t new strategy, but it’s easier to execute when you have a district attorney who despises President Trump and any constitutional conservative like myself who continues to demand all election evidence be made available to the public.”

David Zalubowski/AP, FILEMesa County, Colo., clerk Tina Peters, who was indicted in March on 11 felony and misdemeanor charges related to allegations she and others tampered with secure voting equipment and software, talks at a rally staged to voice concerns about free and fair elections at the State Capitol, April 5, 2022, in Denver.

For the past several months, Peters has been joined by attorney John Eastman, a key architect of former President Donald Trump’s legal effort to overturn the 2020 election, and MyPillow CEO Mike Lindell, a Trump confidant, at election denial events in the state.

“I came to Colorado today because you have here in Colorado the key to the whole nation,” Lindell said at a rally in April, “because you had a great county clerk, Tina Peters, (who) did her job.”

“For people that say we need to look forward — we’ve got to fix what happened in 2020,” Peters told the crowd.

In a similar event in February hosted by FEC United, a conservative group with a militia wing, attendees including Peters and Eastman cheered as self-described election denier Sean Smith said that he had evidence of criminal election conduct by Colorado Secretary of State Jena Griswold.

“You may know me as the number-one most dangerous election denier in Colorado,” Smith told the crowd.

The event spurred Griswold to make a report to the Colorado State Patrol after Smith said that “if you’re involved in election fraud, then you deserve to hang.”

“We are still seeing the effects of the 2020 election,” Griswold said in a statement to ABC News. “Extreme elected officials and right-wing political insiders continue to spread the Big Lie and election conspiracies.”

As voting officials gear up for the upcoming midterm elections, “the potential for violence that we face is very real,” Zygielbaum said.

Michael Ciaglo/Getty Images, FILEA Donald Trump supporter holds a Stop the Steal sign while gathering on the steps of the Colorado State Capitol to protest the election on January 6, 2021 in Denver, Colorado.

Concerns about their staffers’ safety have spurred county officials to adopt a variety of safety protocols. Zygielbaum told ABC News that employees in his Adams County office have been asked not take the same route home on a daily basis.

He said his county has also partnered with the Department of Homeland Security to review their facilities, and is redesigning their elections office “so that voters and individuals who are not employees” cannot go inside the building. In addition, the county is working closely with law enforcement at the state, local and federal level, and has a direct line to the FBI and Terrorism Task Force.

Secretary Griswold confirmed to ABC News that her office arranged for counties to receive a physical threat assessment from DHS, as well as nearly $130,000 in grant funding to make security upgrades.

In the city of Denver, clerk Paul López says he had to move his office away from a first-floor window because it was a security risk.

“I think that folks who think they can intimidate election workers and try to stop us from being able to do our job are absolutely incorrect,” López told ABC News. “We will defend our democracy, and we will do it in a way that inspires people to come to the polls and not scare them away. “

In Chaffee County, county clerk Lori Mitchell has faced personal threats since 2020, with one incident over the summer traumatizing her to the point where she almost decided against running for reelection.

“I saw somebody lay their right hand over their left arm and pull what looked like a gun to me,” Mitchell told ABC News. “And so I ducked in my car.”

“It ended up being a squirt gun,” Mitchell said. “But it was still one of the most frightening days of my life.”

David Zalubowski/AP, FILEJudges check in a voter at a polling site in the Wellington Webb Building as Election Day voting opens, Nov. 2, 2021, in downtown Denver.

Now, Mitchell and other officials in her office speak with constituents through bulletproof glass. To prepare for the midterms, the county is working closely with law enforcement to enact additional measures to protect election workers.

“Colorado is one of the current epicenters of the Stop the Steal movement,” said Matt Crane, executive director of the Colorado County Clerks Association. “And so we are concerned and very worried about the influence and pressure being put on election officials. They are incredibly understaffed and overworked, and now they have to deal with the emotional toll that comes from knowing that you have to do things to protect yourself.”

According to Crane, the state has seen people “putting in open-records requests to get personal information of poll workers and election judges.”

Crane said that as the state prepares for the upcoming midterms, the attorney general and district attorneys have been working with law enforcement organizations to prepare for possible hostile situations against election officials.

Meanwhile, state lawmakers have passed a bill that would ban the open carry of guns at polling places and create new criminal penalties for people who threaten election workers.

A similar bill that is part of a legislative package to increase security for state and local officials was also advanced by a state legislative panel last month. That legislation also includes a bill aimed at cracking down on the attempted sabotage of voting equipment — described by officials as a direct response to allegations against Peters, the Mesa County clerk.

“No one should have to worry about the safety of themselves or their families when serving as an election administrator,” said Griswold.

“By protecting our election workers and officials, we safeguard our democracy,” she said. “We must do what we can to protect and retain our top-quality election administrators at the state, county and local level.”

Previous : Jonathan Quick, ‘a really good goalie in this league for a long time,’ bounces back for Los Angeles Kings in Game 4 victory
Next : Mum, 67, had to spend £10,000 to end her life after a decade of suffering