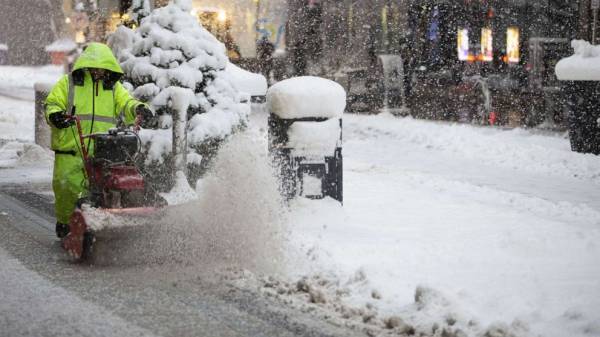 Coldest air of the season hits Northeast, with wind chill well below zero

Millions of Americans woke up to the coldest air of the season on Tuesday morning.

Temperatures plummeted overnight as an arctic blast moved into the northeastern United States.

By morning, the wind chill — what temperature it feels like — had dropped near or below zero degrees Fahrenheit in several areas along Interstate 95, including Philadelphia, New York City and Boston. Meanwhile, parts of upstate New York and northern Maine were almost 30 or 40 below zero.

ABC NewsThe wind chill — what temperature it feels like — dropped well below zero degrees Fahrenheit in parts of the northeastern United States on the morning of Jan. 11, 2022.

The frigid air produced blinding lake-effect snowbands in western New York and Pennsylvania. Up to 30 inches of snow fell in 24 hours near the tiny town of Osceola, New York, some 55 miles north of Syracuse.

As of Tuesday morning, the National Weather Service has issued alerts for wind chill and lake-effect snow in 10 U.S. states, from Wisconsin to Maine.

ABC NewsThe wind chill is expected to be in the teens and single digits along the northeastern Interstate-95 corridor on the morning of Jan. 12, 2022.

Temperatures are expected to warm up slightly in the afternoon, with numbers in the teens for Boston and New York City, though the wind chill will still be close to zero at times.

The arctic blast is forecast to continue for the next 24 hours.

ABC NewsTemperatures are forecast to rebound from Boston to Washington, D.C., on Jan. 13, 2022.

The wind chill is expected to be in the teens and single digits along the I-95 corridor on Wednesday morning, before temperatures rebound to near 40 and 50 degrees on Thursday from Boston to Washington, D.C.

Previous : Girl, 11, who has waited half her life to donate her hair to charity finally can
Next : JPMorgan’s Dimon says consumer loan growth may take 6-9 months to return to normal