Chemical plant worker burns to death after getting trapped in excavator 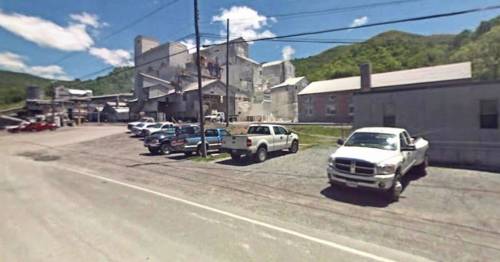 A plant worker has burned to death after after getting trapped in an excavator.

Emergency services were called to Lhoist Chemical Lime Plant before 4pm local time after reports a worker had become trapped.

The horrific incident happened in Giles County, Virginia, in the US, after the contractor was discovered dead as they were unable to escape the cab.

Reported to be aged 50, the victim was found dead after becoming stuck in the work vehicle.

He became unable to escape on Level 7 of the mine after the excavator became swamped by chemicals.

A fellow worker also suffered minor chemical burns and responders on site treated him at the scene.

He had attempted to rescue the trapped man but was unable to save him.

The victims of the accident have not been identified.

They both worked for Gillman Services Inc who were contractors employed to provide services at the mine.

Others on site were able to escape and officials say they have been accounted for.

Virginia Department of Energy crews were reportedly at the site on Tuesday they are also expected to be at the site today.

Representatives from the Mine Safety and Health Administration and Virginia Energy will must give their approval before the plant is reopened.
(

Representatives from the Mine Safety and Health Administration and Virginia Energy will must give their approval before the plant is reopened.

The Mirror told of footage in February when huge digger sank into a river.

The massive Volvo machine became stuck precariously sinking into the water, as police cordon the area off to prevent any accidents.

As the country was battered by its third storm in the space of a week, Brits became more than used to blustery winds and torrential rain.

It included a record 122mph winds and conditions that tragically led to four deaths,

Trains were cancelled and countless damage done through debris and falling trees.

Now footage shows a massive digger and the platform it was once on, stuck in the river.

As the digger sank into the river, the surrounding platform and all the equipment was stuck underwater too.

Rerbanks across the country burst their banks' thanks to the three successive storms that saw localised flooding across the UK.

The footage, filmed on a drone, shows the destruction it has wrought in Leeds.

It also shows a police presence around the area and all they can do is watch as the digger is beyond saving.

The water rushes over it, through the cabin where a driver once sat.

River defences prevent the water from spilling out and bursting its banks thankfully as dozens of cars and buildings are only a few metres away.

This all comes as Storm Franklin hit the UK, it on from Storm Dudley and Storm Eunice, Franklin which brought torrential rain and strong winds to parts of the UK.