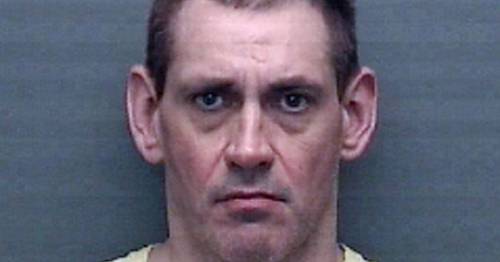 Hulking Casey White has appeared in court charged with escaping prison after 11 days allegedly on the run with his secret jail boss lover.

The 6'9" giant appeared before a judge in Alabama late on Tuesday night following his capture and the suicide of warder Vicky White, who was the architect behind their apparent escape.

Ms White shot herself in the head as police finally caught the pair following a dramatic police chase in Evansville, Indiana.

The couple – who were not related – were said to have been on the run for 11 days after Vicky White, 56, made up a bogus medical appointment for the felon on April 29.

White was temporarily held in her Lauderdale County Jail in Florence so that she could transport him out of his cell.

White at 6ft 9in towers over prison guards in Alabama
(

Vicky White committed suicide after being stopped by police
(

Unbeknown to authorities however, she had been romantically involved with White for two years as he served time for a string of crimes.

White, 38, was heavily shackled on his ankles and with chains around his waist and wrists as he stood before a judge in Florence, Alabama, dwarfing his captors.

He spoke only to assure Judge Ben Graves he had received proper legal advice as he was charged with escape in the first degree.

It was added to a list of felonies White faces, including an outstanding capital murder charge for which he is due to stand trial in June.

White's appearance came as newly released 911 audio reveals the moment Vicky White pleaded with her jailbird lover to "get out and run" as police closed in.

In the seven-minute audio clip, the assistant director of Lauderdale County Jail can be heard shouting: "Stop. Stop. The airbags are going off."

In a quieter voice, she then can be heard saying: "Let's get out and run."

It's unclear who called 911 from the Cadillac the couple were using to try to outrun police.

Seconds after she uttered her final words, their car was rammed into a ditch by US Marshals and Vicky, who was driving the vehicle, shot herself in the head.

Before she pulled the trigger, some of the police chasing them could be heard in a different audio tape saying: "She has her finger on the trigger."

She was holding the gun in her right hand and the weapon was one of four found in their vehicle.