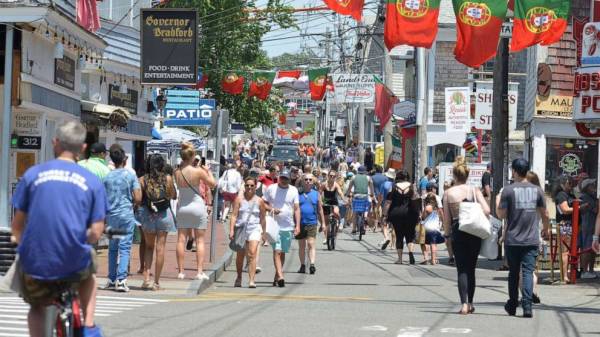 A popular Cape Cod, Massachusetts, summertime destination is reporting a worrisome spread of COVID-19 infections following the Fourth of July.

Officials in Provincetown, Massachusetts, issued a number of renewed mitigation measures on Monday after at least 132 individuals tested positive for COVID-19 in the weeks after the holiday weekend.

Town Manager Alex Morse told ABC News on Monday that the “vast majority” of the COVID-19 cases associated with the town’s outbreak are among vaccinated individuals.

Eighty-nine of the reported cases are amongst Bay State residents, 39 of whom reside in Barnstable County, and the remainder of the individuals, who tested positive, reside in other states and jurisdictions, local officials said.

At the height of its tourist season in the summer months, Provincetown’s population swells from 3,000 year-round residents, to over 60,000 people, according to state data.

“We have a lot of visitors in Town, and given the volume, it’s inevitable that cases will continue to pop up over the summer,” Morse said last week, after the first cases were reported.

Morse reported most individuals are experiencing “mild symptoms.” According to medical experts, fully vaccinated individuals are far less likely to become severely ill, and hospitalized, if infected with COVID-19.

Nina Hargus, and her husband, Stan, of Sudbury, Massachusetts, were among the influx of tourists who enjoyed the busy Fourth of July weekend in Provincetown.

“It really felt like a pre-COVID Fourth of July in Provincetown,” Hargus said. “Restaurants and bars were packed. The streets were filled with pedestrians, we saw very few masks, and no social distancing.”

Last week, Johnny Chagnon, of Vermont, and several of his friends, were thrilled to return to Provincetown after a difficult year. Although Chagnon had heard about breakthrough Fourth of July infections, he had not been too concerned, he told ABC News, because he was fully vaccinated.

“I have a lot of faith in vaccines,” Chagnon said.

Nevertheless, preferring to be cautious, “we were avoiding indoor events, because they were very packed,” opting instead for outdoor events, but without wearing a mask, he said.

However, on Monday, right after leaving Provincetown, he began to feel sick, coming down with a fever, and experiencing shortness of breath, a sore throat and cold-like symptoms.

“Today my fever is even worse,” Chagnon said on Tuesday. Although his symptoms have been manageable, “it’s definitely not what I expected being fully vaccinated.”

With hundreds of people posting images of their Provincetown parties on social media, Chagnon added that the stealthy spread of the virus among visitors “almost felt like a train wreck.”

“I know there’s responsibility on my end, because I’m kind of there, partying like it’s 2019, so I’m a little mad at myself,” Chagnon said. However, he added, “everyone who has tested positive around me was fully vaccinated, so we thought we were doing the right thing, we were doing everything that the town management said, and then this still happens.”

In light of the outbreak, officials in Provincetown have issued a new mask advisory, in which masks are now advised indoors where social distancing cannot be achieved. All unvaccinated individuals, including children under the age of 12, are required to wear masks both outdoors in crowded areas where social distancing cannot be achieved and in public indoor spaces.

Local officials are also now “strongly advising” venues with high density, where social distancing is not achievable, to enforce vaccine verification prior to admittance.

The Boston Public Health Commission also announced that it too would issue guidance for recent Provincetown visitors, after officials identified at least 35 positive COVID-19 cases tied to the Cape cluster among Boston residents.

The city’s residents, who have traveled to Provincetown since the first of the month, are now being urged to get tested, regardless of vaccination status or symptoms, self-isolate, and avoid groups or gatherings for at least five days and until residents have received a negative COVID-19 test. All residents are now being asked to take additional precautions to help identify COVID-19 infections, and to prevent additional spread.

Previous : Phoenix Suns star Chris Paul, 36, ready to ‘get back to work,’ not considering retirement after NBA Finals loss
Next : Jet 2 flight from Manchester to Greece forced to U-turn due to mid-air fault