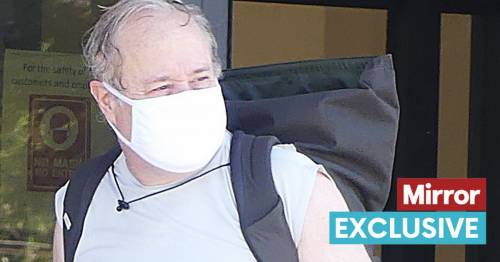 The man who was dubbed the Canterbury Cannibal after he plotted to rape, decapitate and eat a girl has finally been freed in the US.

The Mirror tracked down Dale Bolinger, 65, to his new home just days after his release from a sex offenders’ psychiatric hospital.

When asked if he wanted to say sorry for his crimes in Britain, Bolinger said: “F*** off and die.”

Asked if he had any remorse, the pervert added “loads”.

He now shares a home with sex offender Martin Herron, 44, just yards from a play park.

After learning of their new neighbour’s identity, a dad of two said: “This creeps me out.

“I appreciate sex offenders have to live somewhere but next to a kids’ playground?”

Dale Bolinger out and about

Officials were seen visiting the duo in Lincoln, Nebraska.

Bolinger, a former nurse in Margate, Kent, was jailed in 2014 for nine years after allegedly promising to kill and eat a girl.

At Canterbury crown court, he was convicted of trying to groom a child under 16 for sex.

Bolinger met someone whom he had believed was a girl, 14, called “Eva” on the Dark Web.

Bolinger, 65, is pictured with his housemate and convicted child sex offender Martin Herron, talking to officials

Jurors heard he bought an axe before he was due to meet her at Ashford International train station but she did not turn up.

The father of three was also convicted of possessing obscene pictures of children and writing obscene articles.

After his trial, mum Urlene King said Bolinger wanted to eat her after he tried to suffocate her with a rag soaked in cleaning fluid.

The Mirror's story at the time

He served just three years in jail and in 2018 Bolinger, who has US citizenship, moved to the States. Officials there placed him in The Lincoln Regional Centre.

He was released into the community last week.

A source said: “Since Bolinger arrived in the States, he has been a headache for authorities. He has had to be monitored.”

Bolinger and Herron were visited by officials

He said: “Law enforcement is aware of Mr Bolinger.”