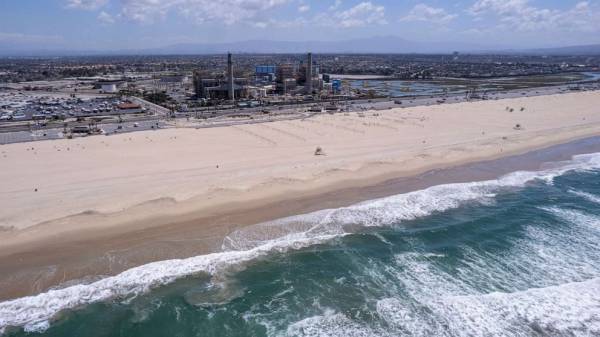 California water officials unanimously struck down a $1.4 billion plan to build a seaside desalination plant amid a water crisis sparked by megadrought and climate change.

The California Coastal Commission, which is responsible for protecting the state’s shores, voted Thursday to deny a permit to seawater desalination developer Poseidon Water to build a desalination plant in Huntington Beach.

California Gov. Gavin Newsom was among the supporters for the plan, which promised to produce 50 million gallons of drinking water a day. Steve Sheldon, president of the Orange County Water District, said the plant would make the county “drought resilient.”

Several environmental justice and ocean groups, as well as the commission itself, opposed the project for reasons including environmental conservation, marine life and the eventual increase in water bills.

“The project would kill marine life in about 275 million gallons of seawater per day,” Tom Luster, the commission’s desalination expert, told the panel on Wednesday, according to The Associated Press.

Among the critics were the Society of Native Nations, which spoke out to “defend, to honor and protect our oceans,” and the Orange County Coastkeeper, which accused those in favor of the desalination plan of building it to “continue to hose down driveways and have lavish water wasting landscapes,” according to ABC Los Angeles station KABC.

Freshwater sources in the Southwest are experiencing critical shortages after a decades-long megadrought, which is expected to intensify and expand east. Last month, “unprecedented” water restrictions were ordered for millions in Southern California, while human remains have been discovered in Lake Mead as water levels continue to recede to historic levels.

Desalination plants remove mineral components from saltwater to create sources for drinking and agriculture but are notoriously expensive. The cost of treating seawater is about $2,000 to $3,000 an acre foot. That is about two or three times the cost of the next cheapest source, which is water conservation — such as buying water from farmers and reusing wastewater, Jay Lund, professor of civil and environmental engineering at the University of California, Davis and the head of the school’s Center for Watershed Sciences, told ABC News last year.

Mike Blake/ReutersThe site of a possible $1.5 billion water desalination plant for the city of Huntington Beach is shown along the Pacific Ocean in Huntington Beach, Calif., May 11, 2022.

A desalination plant proposed by Poseidon Water two decades ago was built in San Diego County in 2015 and now accounts for 10% of the county’s water supplies, according to the AP. Poseidon proposed a plant for Huntington Beach at the same time, but the commission expressed concern in 2013 that the proposed use of intake structures to quickly draw in large volumes of water from the ocean would damage marine life.

Poseidon then committed to conduct additional studies and resubmit a plan to mitigate damage to marine life through restoration of nearby wetlands, according to AP.

In a statement, Poseidon said it was discouraged by the decision.

“California continues to face a punishing drought, with no end in sight,” the statement said. “Every day, we see new calls for conservation as reservoir levels drop to dangerous lows. We firmly believe that this desalination project would have created a sustainable, drought-tolerant source of water.”

Previous : Couple return to hotel room to find wild monkeys have taken over the jacuzzi – World News
Next : Sergio Aguero has refused to close door on comeback amid Man City statue unveiling