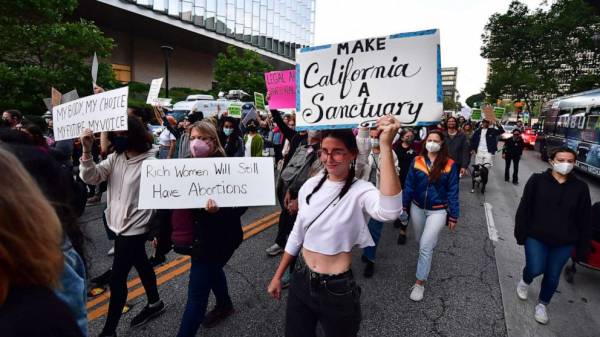 California, New York look to expand abortion access, including to people from other states

As a leaked draft Supreme Court decision shows the court may be ready to overturn the abortion rights guaranteed under Roe v. Wade, state legislators in New York and California are looking to increase access to reproductive services, including to people coming from other states.

The draft majority opinion in Dobbs v. Jackson Women’s Health Organization was leaked to Politico earlier this week and confirmed as authentic by Chief Justice John Roberts, who ordered an investigation into its public release.

Roberts said in a statement the document “does not represent a decision by the Court or the final position of any member on the issues in the case.”

State legislators in California have proposed a package of bills to address what they expect to be an influx in people seeking access to abortion in the state if Roe is overturned. New York lawmakers have also proposed legislation that would help people pay for abortions, even allowing taxpayers to contribute donations.

U.S. Senate Democrats, who have widely criticized the court’s apparent decision, are planning a vote on a proposed bill, the Women’s Health Protection Act, next week which would codify Roe v. Wade, making it federal law. The bill would also outlaw all abortion legislation at the state level, including legislation that was in line with Roe. But it is unlikely to become law, despite passing in the House.

With the Supreme Court decision expected over the summer, lawmakers in Canada expressed concern over how the court’s apparent decision would limit access to abortion in Canada and the U.S.

“One of the concerning factors here is that there are many Canadian women who maybe don’t live near a major city in Canada, but will often access these services in the United States,” Karina Gould, Canada’s families, children and social development minister, told the CBC. “I’m very concerned about the leak yesterday. I’m very concerned about what this means, particularly for American women, but also for Canadian women.”

Gould said American women will be able to get abortions in Canada if Roe is overturned, in the interview.

“I don’t see why we would not,” said Gould “If they, people, come here and need access, certainly, that’s a service that would be provided.”

Those seeking abortions would also be able to get access in Mexico. Last year, Mexico’s Supreme Court rule to decriminalize abortion, deeming it unconstitutional to punish abortion.

The New York State Senate has proposed a bill that would establish an access fund to pay for abortions and allows taxpayers to contribute to the fund on their state income tax returns. The bill is currently with the Senate Finance Committee.

Another proposed New York bill would require insurance policies providing maternity care coverage to provide coverage for abortions. The bill, currently with the Senate Insurance Committee, cited the federal government’s “hostility toward abortion” in its justification for the state’s need to enact such a law.

New York Governor Kathy Hochul, in a letter to Congress urging it to pass the WHPA, said the state can expect an “11 to 13% increase in out-of-state patients traveling to New York for abortion care,” if Roe is overturned.

Hochul said the state is preparing to provide access to abortion care for people from out of state.

“For New York State to fully step up and be able to accommodate everyone who needs care, we need significant federal support to bolster our provider network and accommodate these new patients. Following action to repeal the Hyde Amendment, Congress must make federal funding available to states like New York that expect an influx of patients from other states,” Hochul said.

Hochul also called for federal protections that would allow the U.S. Postal Service to ship abortion medication to all states and for the expansion of telehealth services to facilitate access to abortion.

“As many states work to close off avenues to safe abortion services within their borders, the demand for abortion-inducing medications through mail and delivery services is growing. The U.S. Postal Service is a critical partner to meet the current demand, and Congress must adequately fund the postal service to ensure patients can receive prescribed medical abortion medications, regardless of their zip code,” Hochul said.

In the letter, Hochul also called for the repeal of the Hyde Amendment, which she said has “prevented federal funds from being used for abortion services, including health insurance funds that support low-income Americans.”

The state has also allowed abortion telehealth services and has convened an Abortion Access Working Group, which will meet regularly with patients, providers and advocates to guide state abortion policy and respond to needs.

In anticipation of a Supreme Court decision that would overturn Roe v. Wade, the California State Legislature introduced a package of 13 bills in January in an effort to make California a “sanctuary or a refuge for individuals seeking abortions and reproductive health care,” California assemblywoman and chair of its women’s caucus, Cristina Garcia, told ABC News in an interview.

“We introduce a package of bills and I think the idea is: that a right without access is an empty promise,” Garcia said.

When crafting the bills, legislatures relied on a report from the Future of Abortion Council, a group made up of more than 40 organizations across the state, which gave recommendations to protect and expand access to abortion in California.

Mike Segar/ReutersStudents and others protest for abortion rights as they march from Union Square, after the leak of a draft majority opinion written by Justice Samuel Alito preparing for a majority of the court to overturn the landmark Roe v. Wade abortion rights decision later this year, in Manhattan in New York, May 5, 2022.

According to research from the Guttmacher Institute, overturning Roe, which would allow some states to ban abortions, would increase the number of women whose nearest provider would be in California from 46,000 to 1.4 million.

“That’s an over 1,000% increase for what we see here in California. And so we really need to shore up our access here to make sure we have enough providers that could perform these services,” Garcia said.

Among the aims of the package of bills, the legislature is trying protect the privacy of providers and patients coming in from out of state and widen the number of providers able to perform the procedure and where the procedure could be performed, Garcia said.

Legislatures are doing their best to move up the timeline for when these bills would pass, she said.

“While we were being proactive in January when we introduced the bills and we’re just letting them go through the regular process, we realized that we missed something in our planning. The fact that we expect something come June – July was like, oh, we should hurry up and add urgency, where appropriate, to our bills,” Garcia said.

One bill, which has already passed, eliminates copays, deductibles and any cost-sharing requirements for abortions for all state-licensed health care service plans or disability insurance policies issued after 2022. This would apply to covered spouses and dependents, and Medi-Cal beneficiaries.

The legislature on Friday placed urgency on a bill to protect patients and providers from civil actions and financial retaliation for abortion services that are legal in California. A second bill they are also looking to add urgency to would deny out-of-state subpoenas for patient information regarding reproductive health care granted in California.

“Our goal is to get that through and passed before the end of June, and then would go into effect July 1,” Garcia said.

The California Legislative Women’s Caucus is in the process of identifying which other bills should take priority in order attempt to pass them by the June 30 deadline, she said. Those bills, with urgency, would become law by July 1, according to Garcia.

Other bills could become law as soon as next year. For a bill to go into effect in the new year, it needs to pass the legislature by Aug. 31 and be signed by the governor by Sept. 30. Some of the bills in the package may have later starting dates, according to Garcia.

The package also aims to increase access to people in marginalized groups who have access problems, including Californians.

One of the proposed bills would make Los Angeles a safe haven for abortions, regardless of residency. The bill would also establish a Los Angeles County Abortion Access Safe Haven Pilot Program, with the goal of advancing reproductive healthcare, specifically abortions, according to the bill.

Another bill would use tax dollars to set up a website that would help connect people coming from out of state with groups providing support services for those seeking abortions. The services include airfare, lodging, ground transportation, gas money, meals, dependent childcare, doula support and translation services, to help a person access and obtain an abortion, according to the bill.

“The idea is to create a public-private partnership … so that people looking to come to the state could then be connected to the different groups are already providing that network of support: to help you with the travel, to help you to ensure that you’re at a good provider, [and] that you have lodging while you’re here,” Garcia said.

State legislators from Connecticut and Washington have also reached out to Garcia for advice on implementing similar protections in their states and Garcia has been connecting those legislators with different groups that they work with in California, she said.

Anti-abortion rights groups, such as Live Action, have criticized California’s laws, one of which they said would permit abortions through all nine months of pregnancy. This includes what Live Action’s president called “death by neglect” by failing to provide medical care during the perinatal period after a child is born.

“That should not be the right of California to do. They don’t have the right to endanger children in the womb that way,” said Lila Rose, the president and founder of Live Action.

“It’s really disgusting what [Governor] Gavin Newsom in California is doing announcing that California is actually going to pay for people to come to our state to have abortions, literally making it an abortion tourism state,” Rose said.

She added, “the solution or the response should be we need to work to help women and help children so that they can live as opposed to we’re going to encourage them to literally travel to kill their children or have their children be killed.”

Previous : Strong winds batter New Mexico, complicating wildfire fight
Next : Fewer women in the northwest are in skilled trades training than in other parts of Ontario. Why?