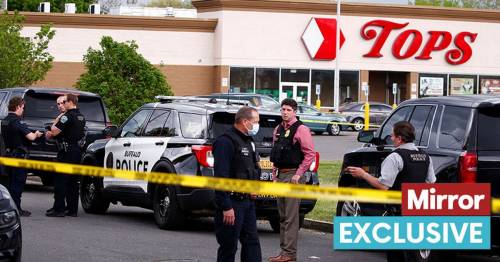 A white supremacist who shot 10 people dead in a racist attack on a US supermarket called for London mayor Sadiq Khan to be killed in an evil rant before his murderous spree.

Teenager Payton Gendron is accused of scrawling the n-word on his rifle before carrying out Saturday's massacre at Tops Friendly store in Buffalo, New York.

The 18-year-old is said to have live-streamed the slaughter – in which 11 of the 13 shot were black – just moments after publishing his horrific 180-page manifesto.

Within the sick document, he called for all whites to rise up and kill African Americans and Jews, saying, "We must ensure the existence of our people and a future for white children."

Police officers at the scene of the shooting in Buffalo, New York
(

Gendron gave his reasons for the attack within his sick document while repeatedly referring to the UK.

On page 165 of his manifesto, under the heading 'Kill high profile enemies', the twisted teen listed Mr Khan as one of three men he wanted dead.

Payton Gendron, the suspect, in court
(

He wrote: "Sadiq Khan, The current mayor of London at the time of writing, an open sign of the disenfranchisement and ethnic replacement of the British people in the British isles.

"This Pakistani Muslim invader now sits as representative for the people of London. Londinium, the very heart of the British isles.

"What better sign of the white rebirth than the removal of this invader?"

Billionaire George Soros and Turkish leader Recep Erdoğan were the others.

Only last week, Mr Khan spent five days in the US.

Elsewhere, Gendron discussed 'The rape of European women by invaders'. He dedicated much of the issue to cases in the UK, providing Wikipedia links to 15' rape cases'.

Before providing the URLs, he wrote: "Many of you may already know about the rape of British women by the invading forces, Rotherham of course being the most well-known case.

"But what few know is that Rotherham is just one of an ongoing trend of rape and molestation perpetrated by these non-white scum."

He sent a "message" to those men involved in such attacks.

"Finally, I would like to send a message to the perpetrators of these attacks and their families. You will hang," he wrote.

"If you are released, we will find you and kill you, if you are in prison we will reach you there, if you try to hide these rapist scum we will kill you as well.

"For the disgrace, you have heaped upon the European people and the distress you have caused to European women, you will die."

The investigation at the shooting suspect's home
(

He then went inside the store, where he encountered a longtime “beloved” security guard and former Buffalo cop, who tried to stop him.

The teen opened fire, killing him before allegedly working his way through the rest of the store.

Police officers secure the area around the TOPS supermarket
(

Buffalo cops confronted the shooter, who at one point put his gun to his own neck before authorities were able to talk him into surrendering.

The gunman, who was wearing military-grade armour, broadcast the attack live on Twitch, the live streaming site owned by Amazon that is popular with gamers.

Twitch said it had taken the channel offline within two minutes of the violence starting.

The channel’s page said only that it was currently unavailable due to a violation of Twitch’s community guide.

Previous : Ukraine shows off devastating British-made Brimstone missiles in action against Russia – World News
Next : ‘I tried fry ups at Morrisons, Tesco and Asda cafes – there were numerous mishaps’