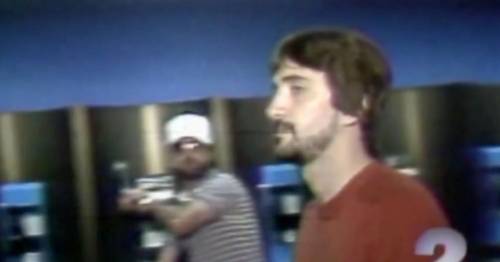 A man who was kidnapped and abused by a paedophile as an 11-year-old has spoken of the moment he watched his dad shoot his attacker dead on live TV.

Gary Plauche, the father of Jody Plauche, shot Jeff Doucet dead as he marched through Baton Rouge Airport, in Louisiana, in front of news cameras.

Doucet, a karate teacher, had snatched Jody and taken him nearly 2,000 miles away from his home in Louisiana, to a Californian hotel in March 1984.

He had proceeded to inflict upon the boy a shocking campaign of sexual abuse and grooming.

Doucet was caught by cops when he let Jody place a collect call to his mum.

The call prompted a police raid, which resulted in Jody being freed and the paedophile shipped back to Baton Rouge.

As Plauche arrived, surrounded by cops, Gary was waiting for him, as was a local TV news crew.

Hidden under a baseball cap and sunglasses, with his back to the camera and standing by a bank of pay phones, the fuming father was ready for vengeance.

TV news cameras were recording as the enraged dad drew out a gun and fired a single shot into the side of Doucet’s head.

Jody said he still recalled the day he saw the video of his dad gunning down his abuser on a 6 o’clock news bulletin.

An officer’s pleas: “Why, Gary, why?” had stuck with him, he said, and became the title of his new book on his dad, the shooting and the fallout.

Speaking to The Sun Online , Jody said he had already looked at the paper, despite being told not to.

He has told of how he recorded the footage on a VHS tape and would watch it “over and over”, attempting to process what had happened.

While many Americans touted his dad as a “hero” for his act of revenge, Jody said did not agree.

"At first I was upset with what my father did because at age 11 – I just wanted Jeff to stop and not necessarily dead,” he said.

Jody recalled being told “Daddy shot Jeff” by his mom, the day after the shooting
(

Gary spent the weekend in the cells over the killing, but ended up being given a suspended sentence for manslaughter along with probation and community service, rather than prison time.

Jody recalled being told “Daddy shot Jeff” by his mom, the day after the shooting.

He recalled bursting into tears at the time, feeling “mad” that his father had killed his abuser.

Despite his dad still receiving applause online by “wannabe vigilantes” who call him a “hero” for killing the paedo, Jody said he “can not” and “will not” condone his behaviour.

While he understood his actions, Jody said it was “more important” for a parent to be there to support their child, than to put themselves in a place to be prosecuted.

The shooting put a strain on Jody and his dad’s relationship, Jody said.

However, things did eventually get back to normal, with Gary explaining to his son that he “felt he had nothing to lose”.

"He told me one of them, if not both of them were gonna die that night," Jody said.

As a Catholic, Gary had the local Priest was his feet and give his “absolution and forgiveness” from God, which Jody said helped him mentally deal with what had happened.

As for Doucett, Jody said he was not angry, instead understanding the paedophile was a “complete sociopath” who lacked feeling or empathy for others and “only used people for his own gain”.

Jody now hoped his book “Why, Gary, Why?” would be of help to victims, survivors and parents who had been subjected to abuse.