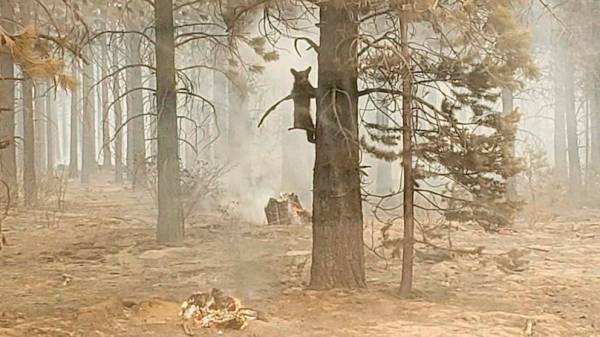 The Bootleg Fire is now the third-largest fire in Oregon state history as firefighters try to limit its spread amid extremely dry conditions.

The blaze had grown to nearly 400,000 acres in southern Oregon by Thursday morning and remained just 38% contained.

While the wildfire is affecting mostly rural areas, it has climbed to the top three fires to engulf the state, according to records dating back to 1900. The Long Draw Fire in 2012 scorched 557,028 acres, while the Biscuit Fire in 2002 burned 500,000 acres.

Handout/Oregon State Fire Marshal/AFP via Getty ImagesThe Bootleg Fire burns near Klamath Falls, Ore. More than a million acres of the western US and Canada were in flames on July 14, 2021 as multiple blazes raged across the region, fueled by soaring temperatures and drought.

In comparison, the Beachie Creek Fire that destroyed more than 1,200 structures in northern Oregon in 2020 burned through 193,573 acres.

This year’s dry season, exacerbated by the megadrought and climate change, has created tinderbox conditions in the West.

Nearly 90 large wildfires are burning in 13 states, with more than 2.5 million acres burned so far this year.

Bryan Daniels/APA bear cub clings to a tree as the Bootleg Fire burns in southern Oregon, July 18, 2021. The cub scurried down the tree trunk and left after water was offered by fire control personnel.

Thousands of homes are threatened and have been evacuated in Oregon due to the Bootleg Fire.

Evacuations have also been ordered near Lake Tahoe due to the Tamarack Fire, which had burned through more than 50,000 acres by Wednesday morning and was 4% contained.

The Dixie Fire in Butte County, California, had scorched nearly 104,000 acres by Thursday and was 17% contained.

Air quality alerts were issued earlier in the week on the East Coast due to the large amounts of smoke being emitted from the fires.

The possibility for new fires to spark remained high on Thursday. Red flag warnings have been issued in parts of Montana and Idaho due to gusty winds and low humidity, while dry thunderstorms caused by the heat of the Bootleg Fire could bring lightning strikes to the drought-ridden region.

Currently, more than 46% of the contiguous U.S. is in a moderate or worse drought, according to the U.S. Drought Monitor, and some of the regions that need rain the most are not forecast to receive any major precipitation that could alleviate the fires.

Rain is not expected for California and the Pacific Northwest. However, parts of the Southwest are seeing some relief due to monsoon storms.